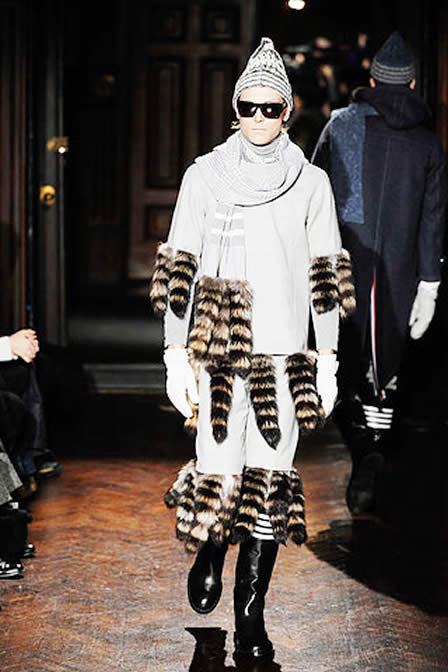 The Thom Browne Menswear Autumn/Winter 2010 collection represents the epitome of the pointlessness of apres ski. Over-sized coats and nordic knits peppered with raccoon tails and shameless compliance. Not what we’ve come to expected from the usually distinct and insightful brand.

Thom Browne (born in 1965) is an American fashion designer. He is the founder and head of design for Thom Browne, a New York City-based menswear brand. Browne was named the Council of Fashion Designers of America (CFDA) Menswear Designer of the Year in March 2006.

Browne grew up in Allentown, Pennsylvania, where he graduated from William Allen High School. He then attended the University of Notre Dame, where he received a degree in economics. He was also a member of the swim team. Following an attempt at acting in Los Angeles, Browne moved to New York City in 1997 for a job as a salesman in Giorgio Armani’s showroom.

Browne was picked up by Club Monaco, a brand of the Polo Ralph Lauren Corporation, to lead its creative development team. He worked with the American fashion designer Ralph Lauren in this capacity. Browne spent several years at Club Monaco leading its design department before launching his own label.