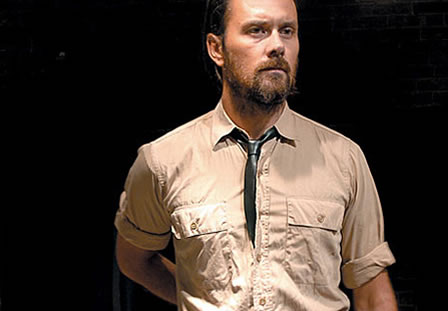 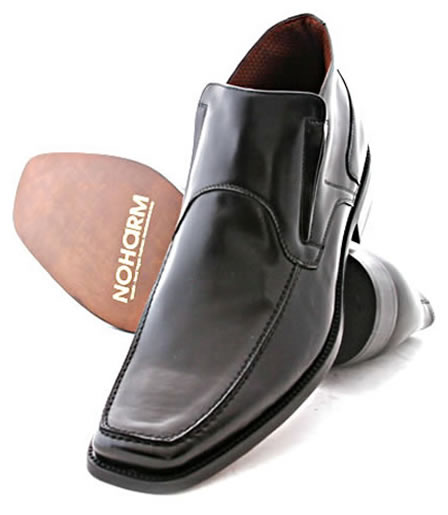 With the growing trend in eco-fashion comes much misleading marketing. The truth is there are a great many brands with true ecologicial credentials like NOHARM, Sugar Cane, Loomstate, Kohzo to name a few but there are also a great many other brands who are simply looking to make a buck off the latest trend. Venessa Lau shares some insightful thoughts:
Â
When it comes to the green movement, Miguel Adrover knows exactly where he stands. And please don’t use the word trend. “It’s all about marketing now,” he said of the eco-craze blanketing the industry. “We need to distinguish between trend and real life.” At a Tuesday presentation of his debut collection for the Germany-based Hess Natur, Adrover noted that the company, for which he’s now creative director, has both “an ecological approach as well as a sociological one.” And indeed, the business uses many organic materials and belongs to the Grameen Foundation, an organization that’s a proponent of microcredit as a means of fighting poverty. 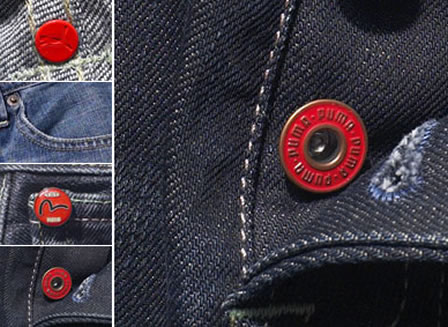 There’s Green and there’s GREEN denim. Most of us think of Sugar Cane, Loomstate, Edun or a list of other Eco-friendly denim offerings when we think of GREEN jeans. Evisu, however, have opted to take it literally and offer a pair of green-hued jeans. To quote the guys: “In addition to ring spun denim with which Evisu has built a solid foundation to their denim assortment in Spring/Summers past, Evisu are now adding an exciting new colour to their offering. For this Spring/Summer, they launch a green shade that will literally make all your friends green with envy. The Evisu designers found the inspiration for this hue when looking through piles of vintage Japanese indigo, as well as kimonos and workwear, all fell in love with it.”

Barney’s, the famous American fashion retailer, chooses a green course for the coming season. Barneys are reputedly starting with Loomstate and Stella McCartney with a view to expanding their eco-friendly product base. Despite their shift Barneys are at pains to mention they will in no way be compromising their high-fashion credentials as they move to the greener grass. “Customers have to have great fashion and great style,” said Gilhart, who has been beating the green drum at Barneys. “They’re not going to give that up. No way.” Looks like Barneys are set to lead the way – hats off to Barneys! 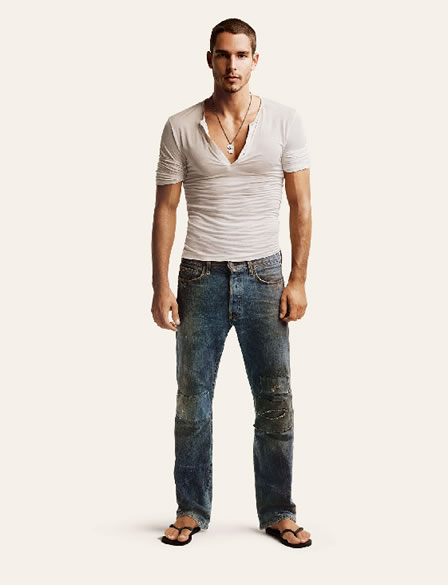 Levi’s is set to launch a new line of environmentally friendly denim this November. “Levi’s Eco” will be made from 100% organic cotton and all external packaging will be made from organic fabric or recycled paper and printed with soy-based ink. The new line will be accesorized with a few subtle hints toward the ‘green’ image including an embroidered lower case “e” and naturally colored “Levi’s” tab.

A spokeswoman Levi’s Eco said: “When you wear them, you can honestly say that you are making a small contribution to a better world.” You Nguyen, Levi’s senior vice president added: “There is clearly a trend towards organic and environmentally responsible products. With Levi’s eco jeans, we are reaching out to fashion-conscious consumers interested in high-quality products that demand less from the environment.”

The dye does not use any chemicals but instead is made from a process involving natural indigo, potato starch, mimosa flower and Marseille soap. But it could also prove to be a profitable winner at a time when older jeans brands are seen as less trendy by today’s youngsters who associate them with their middle aged dads. Levi Strauss revenues around the world fell by one per cent in the second quarter of this year compared to the same period a year ago. Levi’s brand president Robert Hanson said: “As the inventor of jeans it is critical for us to continue to innovate with our products and within the category itself in order to drive positive change. Given our history as a leader in responsible manufacturing and business practices, this initiative is about quality and responsibility never going out of style. With Levi’s Eco, consumers who seek to minimize their personal impact on the environment can choose jeans that demand less from the environment without forfeiting the style or quality they’ve come to expect from the Levi’s brand.” Levi’s is hot on the heels of a growing demand of organic fashion, including Edun, Sugar Cane and Loomstate.

The jeans will be available in November 2006 exclusively at Levi’s U.S. stores with additional products to be introduced in spring 2007. The fall U.S. introduction is part of a global launch of products made with 100% organic cotton. In Europe, the Levi’s brand will offer certified organic denim versions of its most popular styles — the Levi’s(R) 506 Standard Fit Jean for guys and the Levi’s(R) 570 Straight Fit Jean for girls. 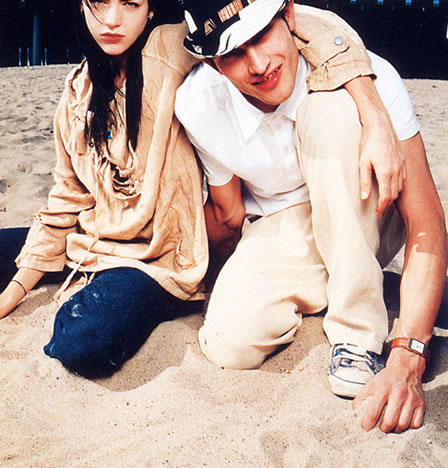 AÂ growing number of top brands have added eco-subdivisions to their corporate structure. Leading brands like Edun – Mavi – Serfontaine – Loomstate – Levis – Armani – American Apparel – Nike – Camper and, of course, the pioneering Katherine Hamnett, have all taken the laudable step of introducing an element of compassion into their fashion.

The main thrust of this revolution is anything from fair-trade to environmentalism, from global-concern to disarmament. Fashion designers are beginning to realise their influence on the world’s youth can be used in a positive way for the betterment of humankind and the wider environment. Let us all hope this is not a passing fashion fade but a deeply entrenched re-evaluation of the onus on influential fashion brands to put as much emphasis on global and moral responsibility as onÂ financial desire. 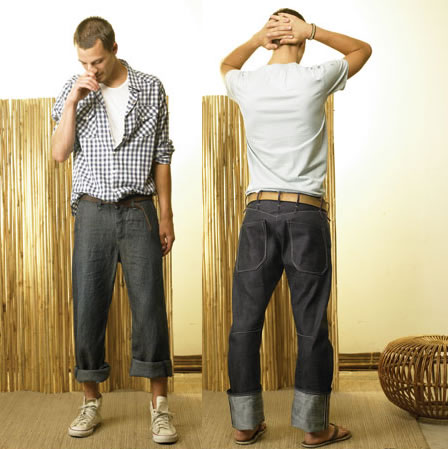 The Rogan volcano is starting to rumble. People are talking about the low-profile brand and an air of excitement and expectation is starting to build. Many top fashionistas will tell us that Rogan Jeans are currently some of the best available in the world and the whole Rogan Clothing line is “poetry in cut and cloth”!

To quote Rogan: “Using advanced construction and wash-processing techniques on time honored raw materials, Rogan creates clothing that combines elements of the past with the finishing technology of the future.”

Keep your eyes on the horizon the Rogan volcano is about to erupt! 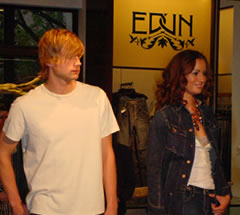 Another Lenten season is almost upon us and Christians around the world, mainly from the Orthodox denomination/s, are packing their coffee, mars bars and other minor indulgences away for another 40 plus days. The sacrifice, if you can call it a sacrifice, does rather pale into insignificance compared with Christ’s 40 days in the desert — that’s desert and not dessert.

Perhaps Lent has some meaningful lessons for the fashion world too? What if some of the major Fashion Brands gave up exploiting third world labour for 40 days and insisted on fair wages for works during this 6 week amnesty? What if the guilty Fashion Houses (we all know who they are) reflected on the barbarity of the fur trade for 40 days – perhaps their suppressed spirit of compassion would see the light of day? What if the fashion trade gave up production methods that harm the environment and during the 40 days held collective workshops seeking environmentally-friendly alternatives? …And us, the consumer, what if we gave up a piece of designer clothing in our wardrobe and donated it to charity and agreed to buy only ethically and environmentally conducive clothing during Lent. What if? What if? What if?

It’s not all doom, gloom and cynicism — the fashion world can take heart from a growing number of ethically and environmentally responsible brands: KOhZO, Loomstate, Edun, Coexist and Stella McCartney amongst others.

Even icons of consumerism and their devotees should turn to the sacred for at least 40 days each year.

U2 frontman Bono (Bonio), wife Ali Hewson and designer Rogan launchÂ a newÂ ethical clothing line Edun. Edun apparent stands for Nude backwards? Their mission is to build a brand that produces desirable and wearable clothing and provides employment in the developing world.

Of course it’s very easy to be cynical of their motives. Is their mission truly philanthropic or is is merely henious self-promotion; U2 are not the band they used to be and some might suspect this represents a desperate attempt to gain the spotlight. Whatever their motives are, they’re certainly entering a growing market. Ethical consumerism is growing at an exponential rate and this is reflected by the growth of a number of brands including: KOhZO, People’s Liberation, Loomstate amongst others. I suspect the answer is to give Bono and the bunch the benefit of the doubt and let time provide the definitive answer? Goodluck EDUN!

The story of Edun begins in Spring 2005. It’s a tale populated by the liked of poet Rainer Maria Rilke, the denizens of the Art Nouveau movement and the lush green forests of the Irish countryside. Edun is the brainchild of U2’s Bono, Ali Hewson, and designer Rogan. It was here that Edun was born as an alternative approach to creating beautiful clothes in a respectful manner. The model is a marriage of social activism and aesthetic innovation. Edun’s goal is to build a business while creating sustainable employment in developing areas of the world, such as South America and Africa. In order to achieve the brand’s design and social goals, the team sought out factories that represent the “gold standard” in skill and labor practices. These long-term relationships provide the foundation by which to build the brand and grow the communities in which Edun works. Edun is committed to the lives of the people who help to make the brand’s vision a reality. Inscribed in every pair of Edun’s jeans is the statement “We carry the story of the people who make our clothes around with us.” Edun wants to keep that story positive by refuting the notion that marginalization and the “Race to the bottom” are the necessary costs of doing business. The beauty of the line’s aesthetics mirror the beauty of its business model, and from that comes a new chapter of an ongoing story – on that Edun hopes others will embrace and follow.