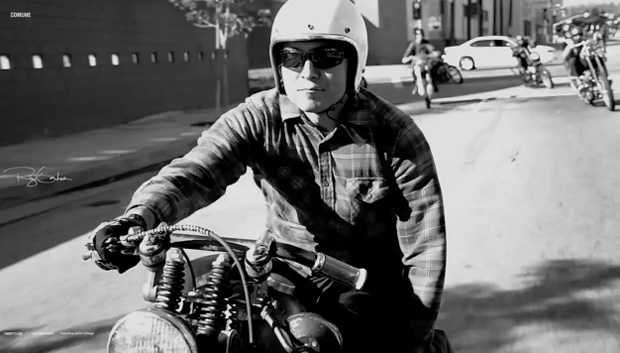 The doors officially opened at 7pm but people had already been showing up early to check out Ray’s photography as well as ten custom motorcycles on display. Ray’s huge macho prints were a collection of photos from the past decade of bikes, hot rods, hot girls, and partied out dudes. These are all the subject matter of “Throttled”. Nearly all of the photos are shot in the Pacific Northwest and Ray’s hometown of Portland, OR.

What draws people to Ray’s photos is that he captures people from all walks of life interested in bikes, cars, and the lifestyle that accompanies them. Ray has a passion for all things petroleum-combustion-engine related. Since he grew up in that culture he doesn’t feel like he has to document one scene or another regardless of trends. He digs it all, and has a deep respect and admiration for anyone who tinkers, cruises, or tears up the road.

Apparently Ray knows a lot of people because the place was packed to capacity. We grilled up some hot dogs and thanks to PBR we had enough cold beer to quench everyone’s thirst. At the end of the photography show Kiyo ripped a burnout inside the gallery leaving circular skidmarks around the Throttled floor logo. The burnt rubber, smoke, and wild applause meant it was only time for the after-party!

We cleared everyone out of the gallery and went next door to Medusa Lounge where a dance party and chaos ensued. COMUNE/Drop City contributors Plague Vendor performed at midnight and tore the roof off the place. After that it’s a little blurry but girls were kissing, people were dancing, and I definitely wasn’t going to be driving.

Throttled LA was hands down the best COMUNE event to date. Thanks Ray Gordon, PLG/VNDR, Pabst Blue Ribbon, all the bike builders, and all the homies at the Holding Company for helping out.