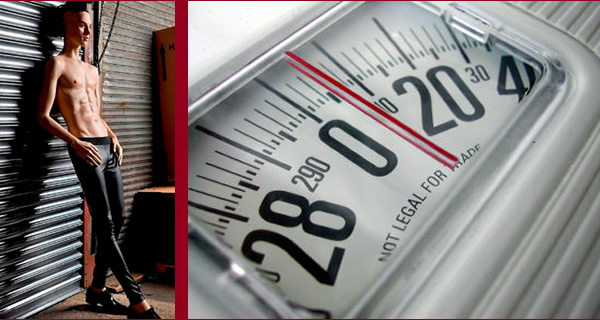 The debate was sparked on the Kitmeout Fashion Forum about Manorexia a few years ago. Is it a real phenomenon today?

Following the decision to ban size zero female models from the catwalk, Clothes Show Live is taking a stance against skinny male models too. The fashion and beauty event viewed over 250 potential male and female models at a recent casting and won’t be working with unnaturally thing models. The decision has been made as part of an ongoing commitment to promote a healthy body images and responsibility within the fashion industry.

The move follows reports that the number of men treated for anorexia – or “manorexia” has increased by 67% in the past five years. This rise has been attributed to the fashion industry’s increasing preference for very slender male models; as well as to the popularity of celebrities such as Russell Brand, Johnny Borrell and Pete Doherty who have made the boyish male physique fashionable within the younger male population.