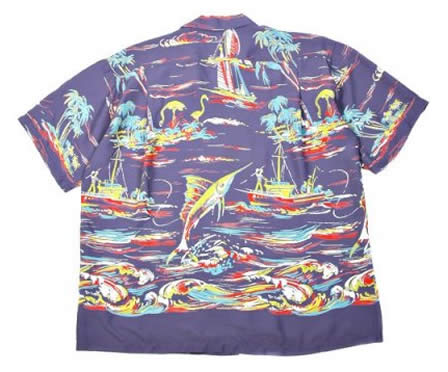 The Hawaiian aloha shirts from the 1930’s – 1950’s have become highly collectible, being correctly perceived by many as an indigenous form of art unique to America and the islands of Hawaii. With the great influx of U. S. service personnel in Hawaii headed to Pacific battlefields during the Second World War, interest in the Hawaiian shirt boomed as every sailor, marine or GI perceived these shirts as a catalyst for the good times associated with a weekend pass or liberty. After the war, the Hawaiian shirt continued to gain popularity from the exposure it received with returning servicemen, Major clothing manufacturers began producing Hawaiian-styled shirts in the late 1940’s and early 1950’s. Presidents Harry Truman and Dwight Eisenhower were forever seen sporting these shirts during relaxing moments at ball games, on vacation or while on golf outings. Hollywood icons and entertainers, such as: Elvis Presley, Arthur Godfrey, Bing Crosby, Lee Marvin and, of course, John Wayne, were also quick to identify with these styles. But it was From Here to Eternity, the magnificent 1954 academy award-winning film about pre-war army life at the Schofield Barracks near Pearl Harbor, that flung the Hawaiian shirt to the forefront of popularity. This film hosts a feast of magnificent vintage Hawaiian shirts, most of which are prominently worn by lead actors Montgomery Clift, Frank Sinatra and Ernest Borgnine. Unfortunately, the great demand for the shirts in the late 1950’s spawned mass production of the polyester shirts of the 1960’s, thus went the unique beauty, designs, style and quality of the original shirts from the first 30 years, hence the great scarcity, collectibility and demand for these vintage shirts today.

Stussy x W-Base “How I Roll”