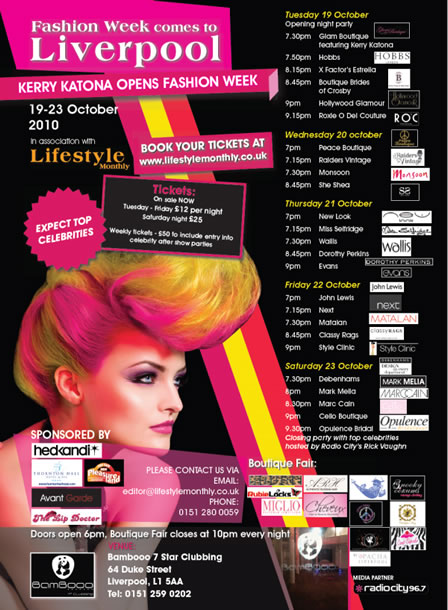 Fashion Week in Liverpool is sponsored by Thornton Hall Hotel and Spa who will be offering spa treatments during the week, alongside the Moroccan themed boutique fair. Other sponsors include The Lip Doctor, Southport New Pleasureland and Hed Kandi.

Dubbed the hottest runway event that the north west has ever seen, guests can expect celebrities, fashion, music, dance and singing as well as shopping all rolled into one. The event is organised by Lifestyle Monthly magazine, the region’s longest running free glossy magazine, and is media partners with Radio City 96.7 FM.

Reality star Kerry Katona will open the Liverpool Fashion Week on Tuesday 19 October where there will be performances from Liverpool girl band Estralla and dance troupe and Britain’s Got Talent finalists Nemesis, who will perform their debut single during the week long fashion festival.