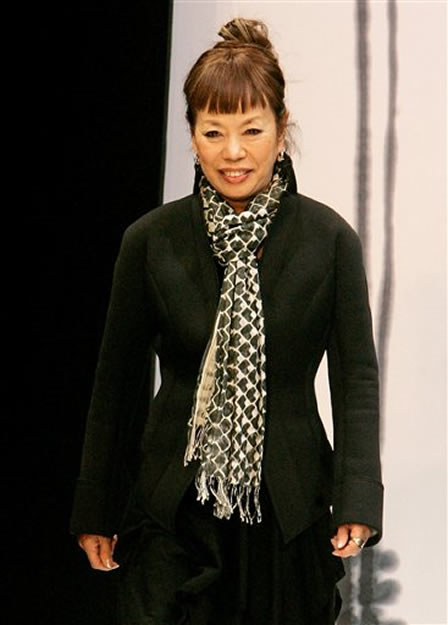 Young Japanese designers are being urged to aim for success at home as a way of opening the door to one of the world’s biggest potential markets — China.

While Japanese designers like Issey Miyake, Yohji Yamamoto and Comme des Garcons’ Rei Kawakubo reigned strong in the 1970s and 1980s, hopeful young successors today are struggling to make themselves known, particularly in an ailing economy.

But veteran designer Hiroko Koshino, who recently presented her latest collection in Paris and has shown in Rome, Paris, and Shanghai as well as Tokyo, said local designers should get known at home first before setting their sights overseas.

“If a Japanese designer were to succeed in attracting a Japanese market, it will definitely open up a huge opportunity towards the foreign market,” she told Reuters Television at the start of Japan Fashion Week on Monday.

“China is now an important market, so it’s extremely crucial for designers to gain an absolute popularity in Japan since Chinese people love to buy what’s new and popular in Japan.”

Koshino, long known for work inspired by calligraphy and traditional Japanese art, looked to Asia for her spring/summer 2011 Tokyo collection titled “The Far East,” making use of ideas of colourful dyeing from Vietnam as well as from ancient China.

“I used a lot of patterns using Japanese ink or ‘sumi,’ which is a distinctive art style of the East. The Tokyo collection is based on my art and I really focused on the textiles when making the collection,” she said.

With Japan’s economy flagging, Japanese merchants of items ranging from luxury goods to electronics have been pinning their hopes on Chinese shoppers, boosted by a recent change in visa regulations that opened up travel to Japan for middle class Chinese.

Stores in the electronics mecca of Akihabara have hired Chinese-speaking staff and earlier this year held special sales aimed at tourists during the Chinese New Year.

Although a recent diplomatic spat between Japan and China may have dented travel numbers, Japan’s National Tourism Organization still projects that the number of visitors from China will reach a record 1.5 million this year.