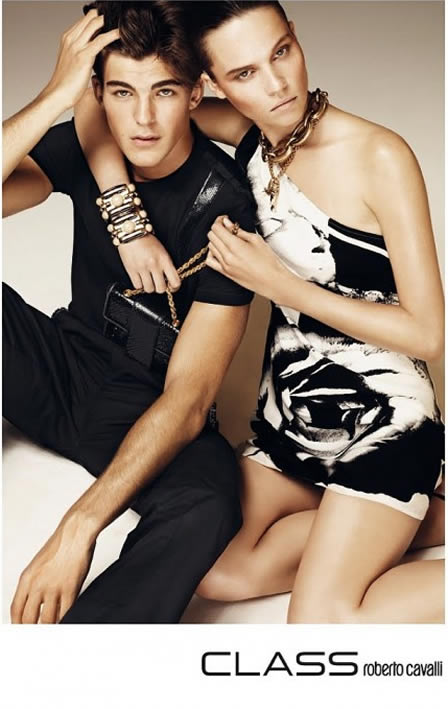 Egle Tvirbutaite and Patrick Kafka are the faces of the S/S 2010 Roberto Cavalli Class’ campaign. Styled by Marie Amelie Sauve and photographed by Giampaolo Sgura.

Since its first show in 1970 at the Salon for Prêt-à-Porter in Paris, Florence-born Roberto Cavalli has been synonymous with glam, rock, and animal prints. His flamboyant Italian style caught on quickly, and by 1972 he opened his first boutique in Saint-Tropez, a perfect French Riviera resort location to sell his signature patchworks of different materials (a printing-on-leather procedure he patented in the early seventies). The decadent life of the designer—summers on yachts, gold on everything—translates into the label, which people go to for a taste of the over-the-top Italian lifestyle. So look to Cavalli for color, and lots of it. A genius when it comes to leather, his designs are wild, sexy, erotic, and fluid. To date, Cavalli has done it all—from menswear, to womenswear, to children’s clothing, to a secondary line named Just Cavalli, to designs for the home. Though he was looking for buyers of the business in 2008, no one ever took on the Cavalli kingdom, so he kept at himself—and in December he launched a nightclub, a fitting business venture for the man who designs clothes club girls love to wear.