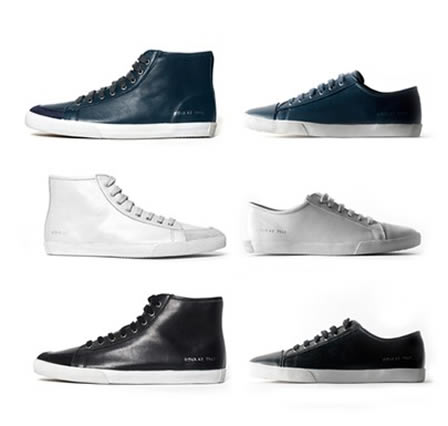 Branded as Evisu by Common Projects, the vulcanized, leather low- and high-top styles will come in three colorways and will feature Common Projects’ foil heel stamp. The fall ’10 styles will be sold at Evisu shops and in select boutiques, and retail for $165 (for low-tops) and $185 (for high-tops).?

Denim brand Evisu named Scott Morrison, formerly of Paper Denim & Cloth and Earnest Sewn, to the CEO position in spring ’09. Under Morrison, the brand announced its intention to focus on its history as a premium Japanese denim brand. And while the label has previously had footwear through a licensee, the Common Projects collaboration will be its first such project under new leadership — and the brand’s only footwear.

Peter Poopat, co-creator (with Flavio Girolami) of Common Projects, told Footwear News that the pairing got his brand back to its roots. “When Common Projects first began, we wanted the label to be something like what we’re doing with Evisu — something for a wider audience, but still premium,” he said. “Originally, we wanted it to sell at $150, so this was an interesting project.”?

Poopat said the collaboration also let Common Projects explore a new construction: vulcanized outsoles. “Scott wears Chuck Taylors a lot, so we thought about Chucks and things like that,” he said. ?

According to Poopat, Common Projects handled the design and development of the shoes, and Evisu oversaw production, as well as sales and distribution. ?

Morrison told FN he thinks the sneakers will bring new fans to Evisu. “Any of our existing Evisu customers would be a natural fit, and certainly that’s intended,” he said. “But I’d also imagine that we’re going to be appealing to consumers who have long admired Common Projects, or to existing customers who want something special.” via WWD.

Obey Clothing Pops Up in Manhattan