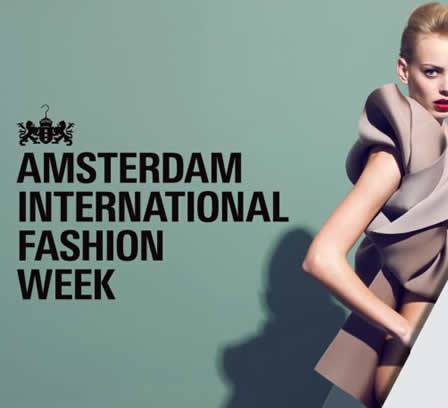 Several new names had the chance to show their collections for the very first time during AIFW including Elsien Gringhuis, Linda Valkeman, design duo Sanne Karssenberg and Cleo Greidanus, and Quoc Thang. In the evening the runway was reserved for more established names to present their new creations for SS10. Mada van Gaans, known for her feminine and elegant signature style, took her inspiration from the ancient world and showed a sophisticated but yet powerful collection.

Despite Claes Iversen’s archive literally went up in smoke in November 2009, the designer made quite an impact on the who’s who of the Dutch fashion scene. The media, models and famous faces applauded him for his talent and optimistic determination. It-girl label SuperTrash was so popular several front row invitees were slightly upset their seats were taken, to say the least. The label debuted in LA, and recently signed singer Pixie Lott to do their exclusive campaign.

The final day of AIFW showcased a mish mash of various fashion labels. Korean designer Hyun Yeu presented his menswear collection Rain, highstreet retailer Claudia Sträter showed its new collection in the afternoon followed by denim label Replay. Last but not least Bibi van der Velde concluded AIFW and took all fashion connoisseurs by storm with her spectacular show. Blue laser light created a futuristic tunnel as backdrop for the models wearing massive bronze sculptures. It proved to be an unexpected ending of AIFW embodying everything but a tunnel vision of Dutch fashion design.