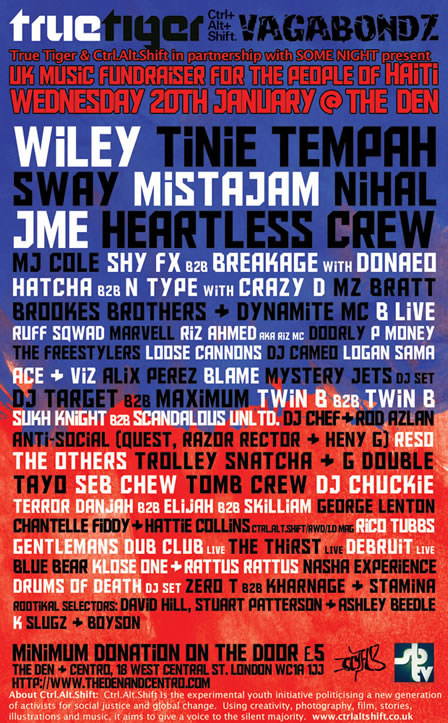 True Tiger & Ctrl.Alt.Shift in Partnership with SOME Night for special charity event in aid of Haiti

SOMEnight, London’s premier weekly dance music event is opening its doors and decks to the cream of both the U’s urban and dance music scenes in a bid to raise money for the victims of the earthquake in Haiti. Having partnered with Ctrl.Alt.Shift, a charity who use popular culture to take global action, and esteemed production outfit True Tiger, some of the biggest names in the business have agreed to waiver their fee’s to appear at the event, with the confirmed line-up a cross section of the UK’s talent spanning multiple genres.

Stanza, of True Tiger explains: “We’ve literally pulled this together in three days. I got on the phone to Jack, the head of Vagabondz promotions at SOMEnight and Chantelle Fiddy, editor of Ctrl.Alt.Shift, about joining forces. We want to ensure our money gets to those who need it the most and Ctrl.Alt.Shift’s partners on the ground in Haiti will do just that. The response from everyone involved has been amazing and people have donated merchandise and goodies for our raffle on the night so we should be able to make a substantial contribution to the world-wide relief effort.”

Tinchy Stryder, the UKs best selling male artist of 2009 says: “It’s so sad and I know everyone who’s seen the news has been touched by how many people have lost their lives and being made homeless. I’ve protested with Ctrl.Alt.Shift before but now, more than ever, it’s about playing your part, so whether you can give £5 or £50, be a part of it. Unfortunately I’m in America and can’t attend the event but I’ve donated a load of gear from Star In The Hood which you can win on the night, so do make sure you buy your raffle ticket too.”

Wiley, currently in the charts with club anthem ‘Take That’ adds: “When disasters like this happen it gives you a reality check and if there’s something we can do to help then we should all do it. An event like this shows that we’re able to come together and make a difference where it matters.”

With 2009 being the year than many underground artists and genre’s achieved mainstream chart success there has never been a better reason for one and all to come together, share a great night of music and raise money for a worthy cause.

The event takes place at the infamous 1200 capacity Den & Centro (formally The End) in central London on the 20th January.

Proceeds will go to the Ctrl.Alt.Shift Haiti appeal. Hundreds of thousands of people are already feared dead and many more are believed to be critically injured. Countless are homeless. The five partner groups are are targeting areas that are getting little help from other agencies. They will provide food, tents, hygiene kits, blankets, jerry cans for water, water purifiers and medical support.

Updates on the money raised and how it’s been distributed will be available at www.ctrlaltshift.co.uk/haiti.