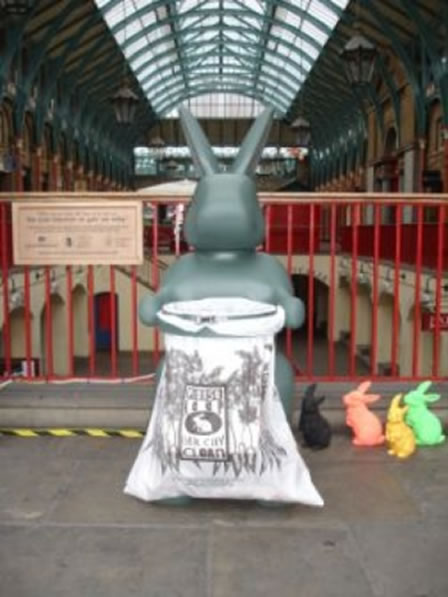 Paul Smith has created a new rubbish bin for London. The ‘New London Rubbish Bin’ will be popping up in Covent Garden and Holland Park for a four-month trial period from 28th May.

The giant rabbit bins, with ears that light up when anyone puts rubbish in them, are Paul Smith’s contribution to Super Contemporary – an exhibition which opens on 3rd June 2009 at the Design Museum.

The ‘New London Rubbish Bin’ is just one of the intriguing responses to a challenge to several of London’s most successful designers to give something back to London – the city that has inspired so much of their work.

“I was pleased to be asked to be involved in the Super Contemporary exhibition at the Design Museum,” says Paul Smith. “I must admit I found it quite challenging, because in any city there are always so many things you love and so many things you don’t and so many things you want to improve. I tried to keep my idea simple and hopefully interesting – I am always amazed how bad people are about litter and how they are so thoughtless. My exhibit is hopefully a tiny step towards making people be better with their rubbish.”

Although Paul’s 5ft-high rabbit bins are intended to be a bit of fun, they still point a brightly coloured finger, or paw, at a serious problem. Every day, the equivalent of 100,000 dustbin bags of rubbish land on the capital’s streets.

Super Contemporary will showcase a wide range of commissions which have also been designed to make London life a little better or more contemporary – from new bus shelters to new uniforms for the ‘Beefeaters’ at the Tower of London.