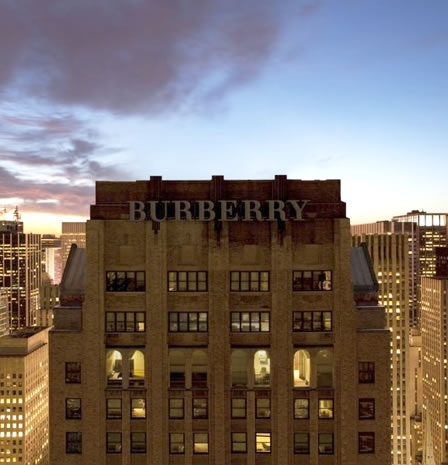 MAYOR BLOOMBERG DECLARES 28 MAY AS BURBERRY DAY IN NEW YORK

London, 27 May 2009 – Burberry is pleased to announce that Thursday 28 May has been declared Burberry Day in New York City.

The proclamation, by New York City’s Mayor Bloomberg, is in honour of the continued investment and commitment Burberry makes to New York and the US and coincides with the official lighting of the Burberry logo on the rooftop of the new Burberry Americas headquarters at 444 Madison Avenue. The site at 444 Madison Avenue is one of only six grand fathered signage locations in New York.

The fifty foot long Burberry logos will be lit across the iconic Manhattan skyline for the first time this Thursday evening, during an event to celebrate the occasion being hosted by Burberry Chief Executive Angela Ahrendts and Burberry Creative Director Christopher Bailey for over 300 guests.

To further celebrate Burberry Day, 20% of all purchases made in Burberry New York stores at 57th Street and Spring Street in SoHo on the day will be donated to The Burberry Foundation.

Burberry currently has two stores in Manhattan and today announces plans to double this figure with two brand new 1600 square foot stores either side of the new Burberry Americas Headquarters at 444 Madison Avenue. The new stores will open at the end of October this year.