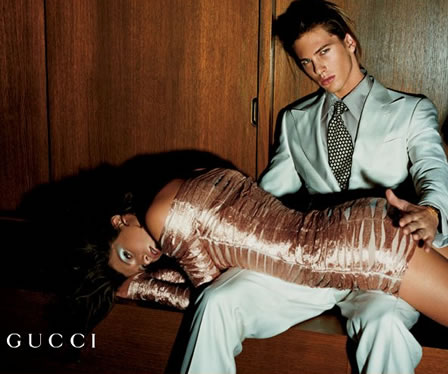 Gucci are another designer brand following the NOHARM lead into high fashion footwear & clothing. Bravo all around!

“Frida Giannini, the creative director of Gucci, has designed a $185 limited-edition T-shirt made of organic cotton and natural dyes. Sergio Rossi is launching a stiletto shoe called the Eco Pump, whose sole and heel are made of liquid wood.

At Bottega Veneta, there’s a specially-designed environmental tote bag free for customers spending more than $1,500, and Alexander McQueen has come up with a signature scarf featuring a picture of the earth morphed into a skull.

The Gucci Group is going green big time next month, to coincide with the launch of a new movie about the plight of the planet Earth that is being sponsored by Gucci’s parent, France’s PPR Group.

The movie, called “Home,” is by French aerial-photography specialist Yann Arthus-Bertrand, and will be released worldwide on June 5 in movie theaters and on TV in more than 80 countries – and especially online.

Google has agreed to stream the high-definition movie on specially-dedicated YouTube pages for 10 days. In the U.S. it’s being distributed by Fox and will be shown on the National Geographic channel.

At a time when sales of luxury goods are reeling from the economic slump, giving brands a green tinge amounts to a different – but potentially risky – way of keeping them in the public eye.

François-Henri Pinault, the CEO of PPR, whose $13 million sponsorship covered most of the movie’s costs, insists that he’s not supporting the project for its potential effects on business, but as part of a bigger commitment to reduce the company’s environmental impact.

“We’re not doing this for our revenues,” Pinault told Fortune. He acknowledges that there’s a risk for a consumer-goods company putting so much emphasis on ecology since it opens the various brands up to criticism of any production methods or products that don’t meet a high environmental standard.

“No brand is perfect,” Pinault says. “It’ll be the responsibility of the brands not to disappoint.” He gives one example: “I hope Frida (Giannini) will now say no to using fur.”

Whatever the motive, it’s an opportunity that the Gucci brands aren’t letting pass by – and are eager to tell the world about their philanthropy. Profits from most of the products will be donated to a charity that Arthus-Bertrand founded.

Stella McCartney may end up making the biggest splash. A vegetarian who has long refused to use leather or fur in her designs, McCartney is planning to host a special screening of the movie at her store in West Hollywood on June 5 with a range of VIPs in attendance, including Laura Dern, Ben Harper, Anjelica Huston and Salma Hayek – who is married to Pinault.”