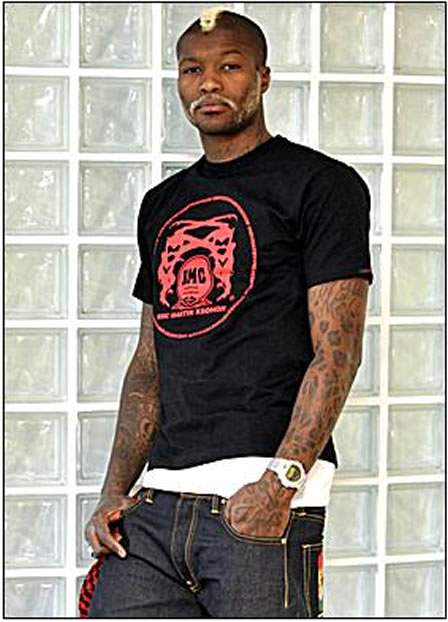 Djibril Cisse, undoubtedly the most recognisable footballer in the world, is seen sporting a RMC logo T-shirt and Warlords jeans in an interview with The Sun newspaper.

Cissé was born to Mangue and Karidjata Cissé who originated from the Ivory Coast. His father, Mangue, was formerly a professional footballer and had captained his country. His parents moved from the Ivory Coast to France in 1974. Djibril was the seventh and last child of his family, after his siblings; Nma, Damaye, Abou, Fode, Seni, Hamed. After his move to Liverpool, Cissé purchased a home in Frodsham, Cheshire, and in doing so gained the title of Lord of the Manor of Frodsham. Soon after buying the home, his decision to refuse the Cheshire Forest Hunt permission to hunt on his land received substantial press coverage. In June 2005, Djibril Cissé married Jude Littler, a Welsh hairdresser from Anglesey. The wedding took place at Bodelwyddan Castle, with notable guests including Shaun Wright-Phillips and Cissé’s French national teammates, Louis Saha, Sylvain Wiltord. Cissé married in a tuxedo in the red of Liverpool.