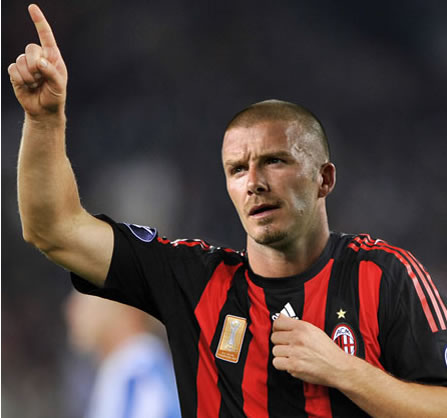 It was obvious to all fashionistas the real motivation for the Beckham trans-atlantic switch was his obsession with Italian fashion. Thanks to our friends at WWD a touch more light is shed on the reality.

“As David Beckham couldn’t make it to the front row at Dolce & Gabbana on Saturday afternoon, the front row came to Beckham later that evening. Standing only steps from the field in the designers’ private box, Domenico Dolce, Stefano Gabbana, a bevy of editors and Formula One driver Felipe Massa looked on as Beckham played for soccer club AC Milan. “Beckham! Beckham! Amore! Amore!” the fashion pack cheered, braving the cold and the cacophony of yelps and boos typical of the Italian soccer experience. “Can you believe how big a soccer sponsor we’ve become?” joked Domenico Dolce, pointing out a colossal Dolce & Gabbana sign that ran alongside the field. Beckham’s wife Victoria and their three children also came to show support, but opted for the view from the presidential lodge above. On Sunday afternoon, Beckham, the star of Emporio Armani’s steamy underwear campaign, scrubbed up and suited up to take in the Emporio show, his arrival evoking audible sighs, but hardly the pandemonium of the pitch. “We’re civilized,” sniffed one men’s editor. “I’m enjoying my time in Milan so far and I want to make the most of it,” Beckham told WWD. “The club, players and fans have been amazing to me so far and have made me very welcome so far. … It’s rare I have time to make a show so I enjoyed it.” Still, he doesn’t seem ready to trade in his cleats for brogues. “My priority though is working hard and playing well for AC Milan,” he assured.” Source: WWD.