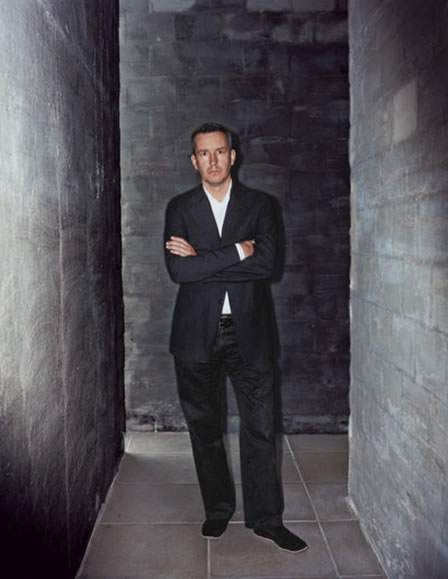 Born in Antwerp in 1958, Dries Van Noten is the third generation in a family of tailors. Between the two world wars, his grandfather reworked second-hand clothes by turning them inside out and introduced Antwerp to the concept of ready-to-wear. In 1970 Dries’ father opened a large upscale fashion boutique in the outskirts of Antwerp followed by a second outlet in the city centre where he sold collections by Ungaro, Ferragamo and Zegna. At the same time, his mother ran a Cassandre franchised store and collected antique lace and linen.

Dries Van Noten S/S 2009 Collection: “We got a major shift in paradigm and aesthetics at Dries Van Noten, the Belgium print master, ethnic driven and gardening obsessed designer who went all modern and chic in his spring 2009 collection staged Wednesday in Paris.

Geometric, in a myriad variations of plaid, and embellished with gold, this rather posh collection was a far more understated effort from recent displays Van Noten.

After leading the fashion industry’s obsession with all things floral ecological, Dries took a new tack with a collection divided into two distinct halves. He opened with symmetrical plaids, dresses, trench coats and bags cut with a certain raffish gentility. His second note were cool airy pastels, dip dyed, yet never hippie-like.

Van Noten also injected some great new glasses, courtesy of the partnership with Linda Farrow, and a neat series of high heels with Moorish bells and trim.

There was a certain brilliant symmetry to the staging, a rare show in the gardens of the Palais Royal, to many architectural fans the finest apartment complex in Europe. Organizers built a tent, with an enormous window on one side, allowing a gray threatening sky to provide the ideal backdrop, while Dries sent out a great series of mini ball necklaces and bracelets that mimicked the Pol Bury, silver pop futurist fountains, around which the models paraded.

While thoroughly elegant, and certainly commercial, the collection lacked the color oomph we have come to expect from Dries, a cerebral panache that nobody else quite does, and for this reason a tad too restrained.”