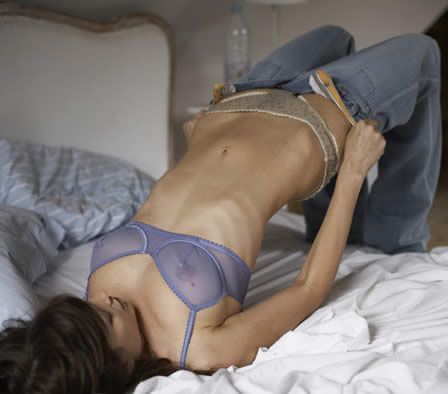 “There are really only two facts you need to know about the personal proclivities of Stella McCartney: One, she’s a Beatles progeny, and two, she’s hard-core PETA â€” an ardent supporter of animal rights and a strict vegetarian. She’s rumored to give her fur-wearing famous friends like Madonna a hard time, and she refuses to use any fur or leather in her designs. So you might imagine how McCartney may have felt when she saw London fur boutique Hockley using her lingerie, without permission, for an ad in the latest British Vogue. She was, ahem, not pleased: The Daily Mail reports that she was “ballistic” and “disgusted” to see her product featured alongside a Â£6,450 (that’s over $12K) mink coat. The designer demanded that Hockley drop the ad; they complied, agreeing not to run it again (of course, it’s already in all those copies of Vogue circulating).

As for McCartney, she needs to think of a system to ensure this kind of mishap can be avoided â€” like a microchip sensor or something embedded in all of her clothing. And if her pieces exploded in red paint any time one of them got within six inches of an animal product, that’d be kind of messy fun! Oh hell, we’re probably behind the curve on this one. We bet PETA has already developed the thing and is working on infiltrating Anna Wintour’s closet as we speak.”

What next! Perhaps Roberto Cavalli will get one of his male models to sport a leopard skin thong and a pair of NOHARM shoes!