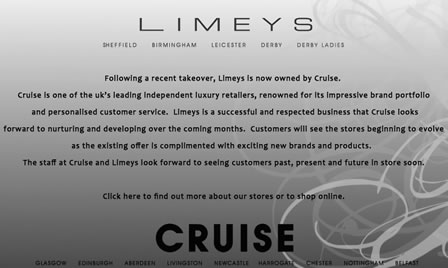 Cruise, arguably the UK’s premier fashionÂ chain,Â will rebrand its Limeys stores as Cruise, as part of the companyâ€™s development strategy. The rebrand will take place during late August across Limeys stores in Derby, Birmingham and Sheffield. â€œIt has always been our intention to introduce the CRUISE concept throughout the UK. The acquisition of Limeys simply accelerated the natural roll out of stores, giving us access to key cities in the Midlandsâ€, commented John Heath, Chief Executive Cruise. â€œWe began online trading at the end of 2007 and will open our 21st store in Bristol later this year. Cruise is now recognized as a national brand and we feel it is the right time to re-badge the midlands stores in line with our move south.â€

The rebrand will coincide with the launch of the autumn/winter season across all Cruise stores, and will see the introduction of new brands under the Cruise banner including Marc by Marc Jacobs, D&G, PRPS and Vivienne Westwood. The Cruise brand mix will be tailored to suit each city. The stores will be cosmetically refreshed during the rebrand, adopting the Cruise brand identity.

Despite the brandâ€™s expansion, Heath is certain that the stores will retain their independent, boutique feel, stating: â€œThanks to our fantastic staff both in store and at head office, we are in a position to identify and respond to the needs of our customers at a local level. Rebranding the Midlands branches creates consistency and familiarity for our customers on a UK wide basis.â€

Established in Edinburgh in 1984, Cruise is renowned for delivering personalised service within unique shopping environments. The luxury retailer offers a mix of international designers, directional street-led fashion and premium denim brands. Limeys in Derby, Sheffield and Birmingham will re-launch as Cruise on Monday 25th August 2008, and Cruise will open in Leicesterâ€™s High Cross development in September 2008.