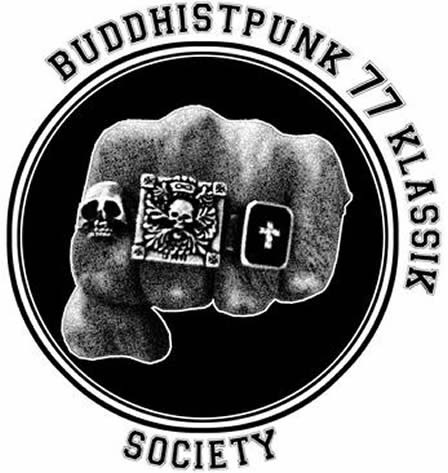 Buddhist Punk has grown into a well respected and unpretentious brand and is worthy of a shout on Kitmeout:

Since Buddhist Punk’s birth in 1999 out of a union of a western metropolitan edge with eastern tropical artisanship, Buddhist Punk remains essentially the same small team that runs the Bali and London studios today on the front line of the culture of global uncertaincy. Buddhist Punk quickly became well known for its handworked printed jersey collections and it’s relationship with the rock ‘n’ roll industry.

Buddhist Punk shares a natural aesthetic with rock ‘n’ roll, the spirit of being in the moment, of mixing pop culture iconography with the now, and is probably the most integrated fashion label with the rock ‘n’ roll industry. Buddhist Punk has collaborated both professionaly and privately with a diverse variety of the world’s best known artists, most recently The Rolling Stones on their just completed Bigger Bang tour. In 2006 Buddhist Punk launched a second line – House of The Gods to specialise in design driven band fashion allowing Buddhistpunk to follow its true maverick fashion path.

For Fall Winter 2008 Buddhist Punk is showing Classic Buddhist Punk revisiting the essence of what makes Buddhist Punk altogether unique.
The menswear and womenswear includes a contemporary return to their much loved jersey collections with complimentary custom tailoring, leather and knitwear.