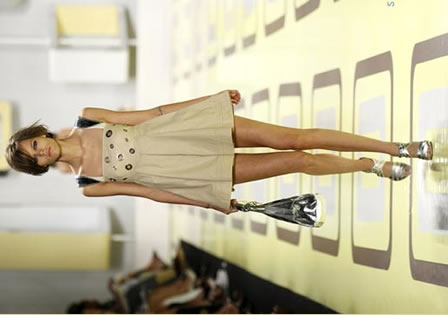 “Miss Sixty’s creative director Wichey Hasson cited Warhol’s 1966 film “Chelsea Girls as inspiration, specifically the dual structure of the film – it’s meant to be viewed on two screens. The claim was that like the film, Miss Sixty is iconoclastic yet glamorous, reflecting a duality in spirit just like the literal duality of the film.
Â
But there was little on display during the Italian brand’s Spring ’08 show in Bryant Park on September 6 that reflected innovation or glamour, save for the glamorous front row of Hollywood megastars: Demi Moore, Hilary Swank, Clive Owen, Maggie Gyllenhaal and Mischa Barton. What Demi Moore, whose love of sophisticated and chic French label Lanvin is no secret, was doing at Miss Sixty is anyone’s guess. But Mischa Barton, a far more age-appropriate guest, seemed to approve of the youthful looks.

“I thought it was great,” she said. “I loved those silver jeans.”

That Barton would single out the futuristic metallic trousers is telling, because overall it’s the pants, in particular their denim – that Miss Sixty is known for and does best.

Ankle-length stovepipes with zips and side buttons were a natural evolution of the last few seasons’ trend of long, scrunched-up skinny jeans.

But unstructured silk tops in supposedly modish Pop Art prints and brown lycra halter tops already looked dated, as though they’d been found on the cutting room floor at a Forever 21 factory in China.

Miss Sixty is not about moving fashion forward, it’s merely a barometer: A commercial representation of existing trends.”