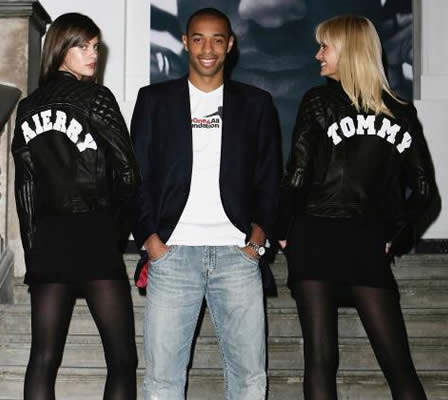 Tommy Hilfiger and Thierry Henry are teaming up to create a new fashion collection calledÂ One 4 All clothing, the proceeds of which go to the anti-racism foundation of the same name.

“I’m very happy to be able bring something to people who’ve had less luck than myself,” said Thierry, the official ambassador against racism for FIFA. Thierry was the top scorer and captain of The London Arsenal. However, this summer he walked out on his team not to mention his wife and kid and moved to FC Barcelona.

“I am honored by Tommy’s interest in my foundation, and if I can do a little to help racism and social inequalities disappear that would be worth all my personal accomplishments,” said Henry.

One 4 All will be a capsule collection inspired by Thierry Henry, Hilfiger stressed, and include suits, sportswear, shoes and underwear. Hilfiger himself is no stranger to the racism debate and has made some very “colourful” comments over the past years. Perhaps this is a path to penance and contrition for both characters.