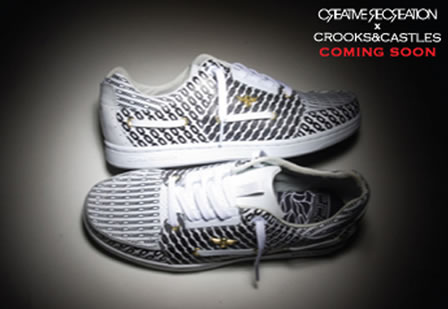 Premiered last magic was the Collaboration between Crooks & Castles and uber footwear brand Creative Recreation. The “Luciano” with the Crooks & Castles chain stripe patterns plus bandito foot bed art is scheduled to be in stores this month!

For those unfamiliar with Crooks & Castles, this is their marketing spiel: “Crooks & Castles have always routed for the villain whether it be in a movie, a comic book, a novel, a rap song or everyday life. Growing up in Los Angeles during the 80’s & 90’s we became a part of this villainous lifestyle. Gangs were everywwhere – the hood, the city, even middle suburbia. Most had no choice but to adapt to the environment. Some were able to escape or even channel what they’ve learned on the street into something lucrative. What caught our attention in the mid 90’s was independent fashion/graphic brands. After years of learning the in’s & out’s of the business by starting a brand without any knowledge of how to start or run a clothing company, we’ve finally come to this… “Crooks & Castles”! The concept was easy. “Crooks”, criminals, pimps, hustlers, thieves, etc. And “Castles” those who got rich by becoming a crook.”