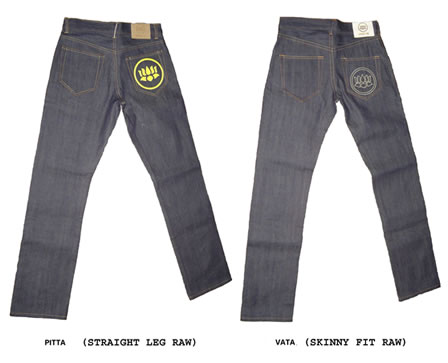 An exciting British based, British designed Premium denim label. Pieces in the collection include Japanese Red Selvedge denim, organic cotton T-shirts and Scottish Cashmere sweaters. You will know Invisible Inc from its distinctive logo, which is the signature of the designer Punky (translated from Sanskrit to English his name Pankaj means Lotus Flower). The Lotus Flower, which is regarded as sacred in Egypt, India, China and Tibet, is also used in Yoga to symbolise the Chakra. The chakras are invisible centres of spiritual power in the human body. This has been the inspiration for Invisible Inc, a concept that not only is visual but also concentrates on the â€œInvisibleâ€ aspects of fashion such as the feel.

Based on the 5â€™000 year old system of mind/body medicine known as Ayurveda, our denims are named after the body types (Dosha), with slim fit being Vata, medium fit being Pitta and loose fit being Kapha. Invisible Inc is a premium clothing label for the enlightened as we believe fashion goes beyond looks, but affects us on many levels. Check out our collection of Skinny (Vata) and Straight fit (Pitta) raw Japanese Selvedge denim, and Organic Cotton T-shirts launching into Selfridges, Oxford Street in the LA Denim Dept.