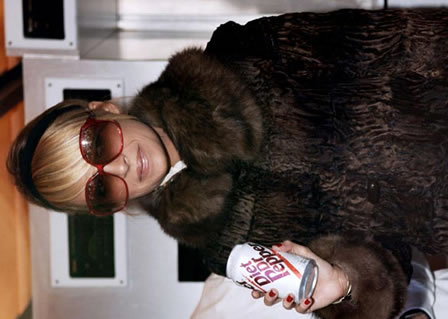 Nicole Richie has topped the world’s worst-dressed list according to PETA, the People for Ethical Treatment of Animals charity, for wearing too much fur. It’s that time of year again, when it starts to get a little bit colder and you can spot a select few of Hollywood’s trashiest celebrities strutting around with dead animals strapped to their backs.

Nicole Richie: PETA’s conclusion: “This pelt-wearing party girl is all animal skin and bones. Sheâ€™s an incredible shrinking woman with the heart to match.”

Ashley Olsen: PETA’s conclusion: “Wearing fur does add 20 pounds, but if Ashley wants to fill out her frame, we suggest using a fork instead.”

Christina Ricci: PETA’s conclusion: “Disregarding the holiday seasonâ€™s â€œPeace on Earthâ€ message, Ricci recently posed for a magazine cover wearing fur from slaughtered reindeer. At least sheâ€™s not into fur hats: Imagine how many more pelts it would take to cover that forehead.”

Eva Longoria: PETA’s conclusion: “Youâ€™d think sheâ€™d be more sympathetic to the plight of rabbits considering the way she screws around like one on Wisteria Lane.”

Notable absences from the list are Paris Hilton and Lindsay Lohan, both of whom have made some attempts to ditch the fur from their wardrobes this yearâ€”so here’s hoping they remember their resolution.