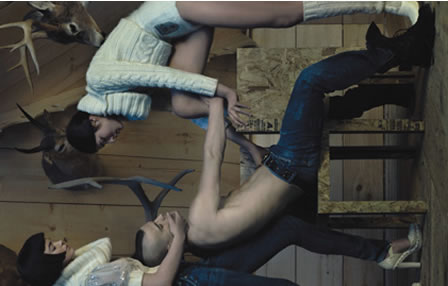 A crown: an unmistakeable symbol of strength and independence, that celebrates a man who is able to reign with his own will.

The suit was the way in which man boasted his own self-assurance and his own power, today he no longer has that necessity.

A new man is born: not the daring man of the 80s, not the introspective one of the 90s, today a man is aware, independent and has conquered a perfect equilibrium between body and mind.

This new man discovers self-esteem and the satisfaction of looking after his own body.

The Dolce & Gabbana man has always understood the importance of oneâ€™s own personality and has never kept secret his desire for sensuality, although this could undermine the rules of etiquette.

It is evident how the Dolce & Gabbana style has influenced, on a global level, menâ€™s clothing by imposing itself as the predominant aesthetic taste, also for those that Dolce & Gabbana does not dress: jacket, shirt and ripped jeans.