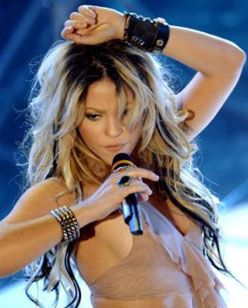 Pop Queen Shakira, the woman who wants to redeem us with her mesmeric hips, has received an award from the United Nations for her humanitarian work to help women trying to escape poverty in developing countries.

Shaking Shakira has been supporting the microcredit loans scheme, which has assisted millions of women start their own businesses and, hence, break the chains of poverty and hunger so tightly restricting so many women in the third-world.

To directly quote the pop princess: “Hips Don’t Lie”… unlike certain officials at the UN! Shakira, Humanitarian Heroine or Humanitarian opportunist? Let’s be charitable too and say the former.