Ice Cream Sneakers & Trainers – are they starting to melt? 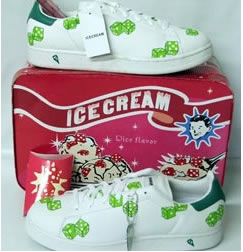 Is the tasty Ice Cream Sneaker brand starting to melt? Everyone loves ice cream, whether the stuff you eat or the stuff you put on your feet. Pharrell and Nigo hit on a great concept a few years back and the complications between the guys and Reebok were a real pity for everyone concerned including the eager customer. That said, once you expose ice cream to that kind of heat it will inevitably start to melt and that’s manifest today by the dwindling excitement surrounding Ice Cream sneakers.

Hats off to Pharrell Williams and Nigo though for trying to rescue the brand from a sticky end. The guys have not let their dream die and the official website tells us:

“Ice Cream Footwear is a morph between the skate and urban world. This exclusive collection is available in limited distribution at high-end boutiques worldwide. Ice Cream’s uniqueness and creativity are set forth from the outset, with each pair encased in packaging that resembles an actual ice cream carton.

The Ice Cream sneakers collection is a result of a collaboration between Pharrell Williams of “The Neptunes” and one of today’s hottest global designers, Nigo. Nigo is best known for his “A Bathing Ape” Clothing Line.”

That’s not such a far cry from what Reebok told us back in 2004:

“Ice Creamâ€™s uniqueness and creativity are set forth from the outset, with each pair encased in packaging that resembles an actual ice cream carton. The first shoe in the line is a skate-influenced silhouette with a low-profile design that features sparkling images of diamonds and dollar bills. Additional images to be featured in the footwear collection include radios and dice and pagers and money rolls. Ice Cream is available for a suggested retail price of $200 and will debut in three colorways: black/red/blue, yellow/navy/blue and white/black/red.

So maybe the Ice Cream sneaker brand has started to melt – So what! Some of us like it messy.