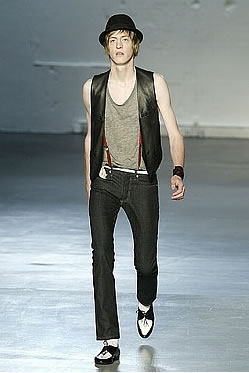 Has Dior Homme gone all Millennium MOD and transformed itself into a rich man’s Henri Lloyd? Some fashionistas might argue the present designer route of Dior Homme would make their illustrious founder hit the roof if he was still on planet earth!

Christian Dior (January 21, 1905 â€“ October 24, 1957), was an influential French fashion designer, born in Granville, Normandy, France. Dior attended the Catholic school College Stanislaus, and then the Paris Institute of Political Studies (better known as Sciences Po), after which he established his main house of couture in Paris in 1946 with the backing of textile magnate Marcel Boussac. He expanded his business to 15 countries and employed over 2,000 people. Christian Dior became known as the father of couture, his elegant and innovative designs setting new standards in excellence and his vision leading the way forward and never succumbing to temporal trends. It’s a shame the same cannot be said for the currentÂ Dior Homme collection and design momentum. It looks like Dior needs a new Yves Saint Laurent style epiphany!