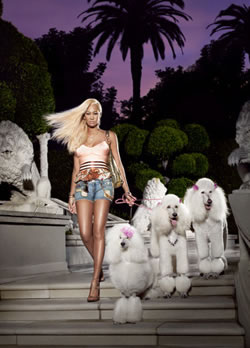 Baby Phat first came into existence as a publicity tool. Hip-hop mogul Russell Simmons produced tiny tees with the clever name “Baby Phat” to electrify his men’s Phat Farm runway shows. When celebrities and models such as Tyra Banks and Claudia Schiffer started wearing these tees, they became such a phenomenon that the decision was made to launch an entire Baby Phat collection.

The perfect choice was to bring Simmons’ wife, Kimora Lee, on board as the creative director. Kimora has always been a celebrity, gleaning attention from both the fashion community and the music world. At age 13, she became the muse to the house of Chanel and its designer Karl Lagerfeld. “Dealing with Karl and seeing how he interacts with the staff gave me a different perspective that would not have had otherwise,” she said in a recent interview with Women’s Wear Daily. “I saw how his mind worked, how he expressed himself, not to mention that when your first job is Chanel, that plants fabulous seeds in a girl”. Baby Phat reflects Kimora’s buoyant energy and her strong opinions of style lent from her experiences as a model and a hip-hop socialite. From the lines’ inception, Kimora has a strong hand in molding the style an imagery of who the Baby Phat woman is, from details on lingerie to treatments on denim. “We may use camouflage if it’s the trend of the season, but it will be executed in our way” says Kimora Lee. “We’ll put glitter or caviar on it, or do it in a softer brush pattern, but always sexy.

Who Wears It – The young and the hip-hop, and a few others, among them Madonna, Alicia Keys, Ashanti, Tyra Banks, Britney Spears, Beyonce, Jennifer Lopez, Mary J. Blige, Eve and Eminem (just joking!)

Ted Baker Clothing – On the rise!