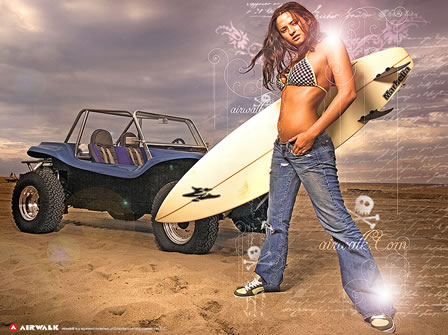 “Team Airwalk’s Pro-Surfer Josh Mohr will compete in the 42nd Annual Easter Festival April 13-16 in Cocoa Beach, FL. Josh will be exhibiting his style and quality of surfing in front of huge crowds of spectators. Josh, show the East Coast how it’s done!

The Evolution of Boardsport Culture – Airwalk’s Fall 2006 Brand Campaign-Collective Licensing International (Collective) announces the launch of Airwalk’s Fall 2006 ad campaign, “Escape from New York.” Airwalk, founded in 1986, has always led the evolution of boardsport culture and fashion. Now the brand is once again headed into new territory by mashing together boardsport culture with the urban cool, youth style and international flair of New York City (NYC).Â  The hectic, concrete urban settings in and around NYC create a visually stunning contrast to the laid-back, casual, West-coast vibe of the Airwalk brand.Â Â

In an effort to create a new standard of visual excellence, Collective partnered with Los Angeles-based photographer Michael Muller. Muller has worked extensively with some of the best known actors and musicians, in addition to shooting campaigns for brands like Dita, Nike and MTV and most recently the Academy AwardÂ® winning “Walk The Line” and the soon to be released “X3.” Airwalk’s professional athletes were used throughout the shoot to demonstrate the merging of youth culture and action sports with the intense heartbeat of a major metropolis.Â  The campaign was shot in several locations over three days.Â  Backdrops included the famed Autumn Bowl in Brooklyn, skateboarders hitching rides from taxi cabs in Times Square, surfers searching for waves on the Hudson River in a snowstorm and snowboarders trying to escape the concrete jungle of Manhattan on their way to nearby mountains.Â

“Airwalk has always had brand equity, but the opportunity to illustrate the brand’s spirit through these evolving visual stories each season creates a powerful community and propels our consumers to wonder what’s next,” explained Jeffrey Buice, creative director for Collective Licensing International. “‘Escape from New York’ gives us the opportunity to showcase the boardsport culture in a more mature and fashionable manner, bringing the brand to new heights and propelling our global brand presence.”

The “Escape from New York” Airwalk campaign will hit stands in multiple action sport, lifestyle, music and fashion titles in support of the Fall 2006 season, beginning in June 2006.”