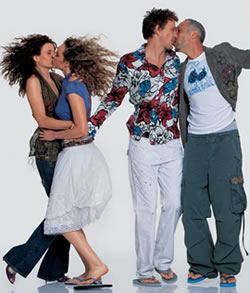 RARE Jeans continue to persist with their controversial marketing campaign which pitches same gender individuals in overt sexual scenes. Many argue this strategy is no more than reverse-marketing aimed at attracting recognition and attention through controversy and provocation. No doubt, this technique can be very successful. However, the execution needs the skill and precision of an experienced surgeon as even a minor slip will have devastating consequences. RARE Jeans may have severed a main artery with the execution of this campaign.

This is a loose English translation of the RARE Jeans campaign: “The concept that is at the base of the new campaign of communication integrated by Rare, developed in collaboration with the great creative photographer, Oliveriero From Tuscany gets expression from: “MaximumÂ  liberty of behaviors, interpretations and principles of expressions, and that of a homosexual.Â  Also this and the sense and the spirit of fashion.

In the photographic images flown out of Tuscan Oliveriero two men play with their sexuality. They touch themselves. They joke. They do not take themselves too seriously.Â  But, they respect themselves. They give life to a shape of obvious ambiguity.”

Translation issues aside, why would RARE, or any fashion brand, believe they can enhance their brand’s popularity amongst heterosexuals by promoting their product through homosexual lifestyle scenes? Surely this alienates both heterosexuals and homosexuals alike. Heterosexuals will not want to be seen in aÂ brand whichÂ is advertisedÂ with homosexial connotationsÂ and homosexuals may feel the campaign is exploitative and misleading. All in all, this campaign looks like a lose/lose effort! Perhaps RARE have inadvertently confused being edgy with being senseless.

Elton John, Out of the Closet