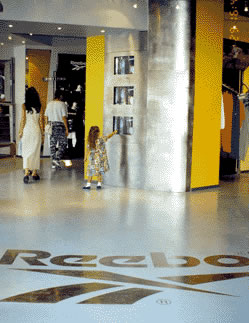 Reebok, the sportswear brand recently acquired by Adidas-Solomon AG, is causing something of a stir with its “shockers”. And by “shockers” we’re not referring to a new innovative bio-mechanical and ergonomic footwear revelation – God forbid! No, we’re referring to controversial advertising which includes depictions of Satan – indeed, God forbid!

Only last year Reebok ran a controversial television advertisement which depicted 50 Cent, the renowned uber-rapper and former drug dealer who lives in Connecticut, counting the number of bullets that have been shot at him. The famous rapper laughs and then looks into the camera as a voiceover asks, â€œWho do you plan to massacre next?â€ The advertisement was pulled in the United Kingdom. This type of tired and frankly puerile advertising is a long way from Reebok’s roots which where planted in the soil of step-aerobics and Richard Simmons’ anti-inertia classes. Indeed, the brand appears to be at the antithesis of its roots with its direct association with the negative side of hip-hop culture.

Given the negative connotations associated with Reebok’s patently obvious attempt to woo the dark side, many knowledgeable commentators are asking could this negatively impact their new parent company, Adidas. Adidas still has a strong customer base in Middle America and mainstream Europe and surely the last thing they would want to do is alienate their main customer base by supporting advertisements glamorising Satan and murder.

The Congress of Racial Equality is outraged by Reebokâ€™s negative message about black men. â€œ50 Cent was a drug dealer and proud of it,â€ says Niger Innis their spokesperson. â€œThe fact that corporations are going to reward that kind of behavior is an outrage.â€ Let’s hope Reebok and now, more importantly, Adidas take note of this valuable advice and they start to glamorise wholesome and decent role-models and ideologies.