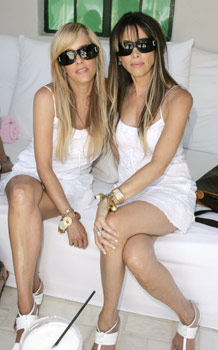 Juicy Couture is possibly the biggest fashion phenomenon to hit the high street and cyberspace in the past decade. Before the advent of Juicy Couture nobody would have guessed that you could slap the word JUICY across the rear of a pair of terry toweling pants and make a mint. But hey, the Juicy girls had a vision and the determination to bring Juicy Couture to life and nobody can deny their amazing success.

So what’s the history? Juicy Couture is the story of two girls named Pamela Skaist-Levy and Gela Taylor from Pacoima, California who wanted to create the best you can find collection in girlie clothes. Juicy Couture was founded in 1994 as an upscale T-shirt line. It later expanded into denim and sportswear, and in 1999 the designers introduced their signature low-riding drawstring JUICY pants and form-fitting zip-up hoodies in an ever-widening array of velour andÂ terry cloth. Although the JUICY pants are a run away success with their target audience it must be noted the associated innuendo has caused a significant amount of indignation amongst certain sectors of our community.

Juicy Couture, like any business, is now trying to diversify.Â The brand nowÂ includes both aÂ men’s and a childâ€™s clothing line. This is where we start to see the problem in defining a brand so clearly in its formative years. Juicy CoutureÂ was marketed asÂ your archetypal ladies’ brand so any attempt now to cross over into menswear is utterly futile. No guy, not even your die-hard metrosexual, would be seen in Juicy Couture clothing not to mention a pair of Juicy Pants with the word JUICY blazoned across the butt. The lesson here for Juicy Couture and up-and-coming brands is it’s prudent to inject a degree of ambiguity into your initial marketing so not to box yourself into a predefined and inescapable corner — Ambiguity is a useful marketing mantra. That said and to be fair to the girls at Juicy Couture, if their initial concept had not had such an unambiguous definition then it’s likely Juicy Couture would not be the success it is today — a successful ladies’ brand!

Returning to the issue of the innuendo associated with having JUICY plastered across a woman’s derriere and the indignation that incites in certain sectors of our community, it’s perhaps fair to say this is greatly compounded when introduced into a child’s clothing line. Juicy Couture plays heavily on innuendo and therefore a large percentage of parents will be loathe to purchase Juicy Couture clothing for their kids and some might suggest that Juicy Couture even create a completely new name for their child’s clothing line which is utterly devoid of any innuendo.

So the girls at Juicy Couture should feel proud of their successful ladies wear brand but in all fairness they should forget menswear and rethink their whole approach to their child’s clothing line and marketing strategy. Maybe we can help them out and think of a name for their childâ€™s clothing line? What about Lippy Couture!