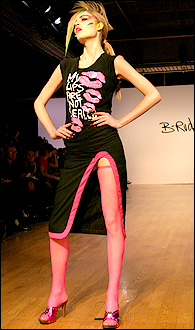 The B-Rude label was actually born back in 2004 and consists of bold clothes and T-shirts for men and women. If Boy George’s eccentric and often breath-taking personal fashion sense if anything to go by the B-Rude label will, if nothing else, stun and amaze the fashion world — at a guess it’ll be like imploding Vivienne Westwood over Jean-Paul Gaultier and then adding a bucket load of John Galliano and finally a pinch of Buddhist Punk; a crazy divine mixture which has the potential to be a success.

So hats off and good luck to Boy George and his B-Rude label — definitely one to watch!