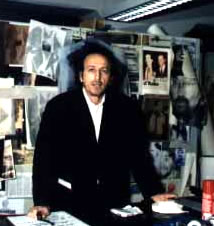 Massimo Osti Studio is very sad to announce that its founder, Massimo Osti, passed away on Monday 6th June 2005.

Our grief is for the loss of an unquestioned leader who, as Renzo Rosso (Diesel) described â€œhas marked important moments that fashion will rememberâ€.

Creator of brand trademarks such as CP Company and Stone Island since the seventies, Massimo Osti imposed himself for his abilities of invention, research and experimentation with forms and most of all materials.

An inventor more than a traditional fashion designer, Massimo has always emphasised the functional, technological and innovative aspect of his garments instead of simply mutating fashion tendencies.

His long research brought him to build an archive which includes over 30,000 garments and 55,000 fabric samples. Examples of his innovations that we remember are the fabric coatings such as joint fabrics, thermo sensitive fabrics, rubber flax and rubber wool as well as being the first to use specialised garment dying and stone washing.

With his capacity to anticipate the future, he has traced paths that many others have pursued and will continue to follow. The entire textile industry has been entirely revolutionised by Ostiâ€™s research.

Conscious of inheriting this great richness of ideas, his son Lorenzo and daughter Agata, together with some of Massimoâ€™s well known collaborators, will carry on the legacy of the Osti Studio with the objective of continuing the creative work of the past years and eventually producing a Studio Osti collection.

However, Lorenzo and Agataâ€™s first project has been to create a Textile Library. This new project, which started in 2004, with Massimoâ€™s help, will hold and preserve the constant research brought on by Osti in a period of 30 years activity.

Massimo Osti Studio will also continue the activity of styling consultant which has always been tied to innovation and research within the textile industry.

Even the most dedicated Fashionistas might’nt of heard of Massimo Osti!

Nonetheless Massimo Osti’s contribution to menswear in the 20th and 21st centries is undoubtedly as momentus as that of Giorgio Armani, Hugo Boss, Gianni Versace, Yves Saint Laurent and Franco Moschino. Massimo Osti, a reclusive Italian, is a truly unique and innovative thinker, fabric engineer and designer. A father of 3, Massimo Osti recently started a fresh new brand: Left Hand and Production.

Massimo Osti’s work with Left Hand and Production only hints to his immense pedigree; Massimo Osti created CP Company and Stone Island – the two brands which influenced a whole generation. Massimo Osti has influence many of the world’s top designers, including Helmut Lang and even Prada.

Left Hand and Production is destined to be a leader in 21st century fashion!