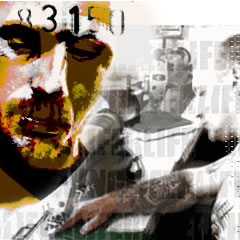 Â Get ready for the latest in designer street wear, welcome to the world of Gronk. They chose to create what may arguably be the rawest and most emotive brand to hit the streets.They wanted to give people are real sense of freedom and a product that they could feel. The way they did this is to make the clothes in a real place with real emotions that people would understand.

Gronk is a brand that has no middle ground and tries to capture the emotions behind life in gaol. Their slogan Made by the Captive for the Free illustrates the contrast between where the clothes are made and for whom they are made for. Every inmate that works on each item knows that only the garment will see freedom.

Gronk involves using established inmate labour within NSW gaols. The inmates make each item of clothing from the ground up under the supervision of the Gronk team. Each piece of clothing has a different saying written inside which is their way of signing off the garment.

Gronk will only ever be made in gaol using local raw materials, giving each item a genuine and honest depth to the label.

Through making Gronk in gaol inmates are provided with gainful employment, industry recognised skills, a means to contribute to victims of crime, the cost of their incarceration and other works programs.

Mika goes for a Piaget