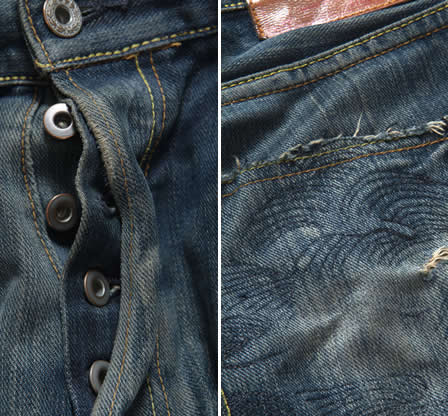 Kitmeout user shares 2 year old well worn RMC jeans. Notice the red logo on the leather patch. Authentic RMC only have a red logo. This red logo is a good identifier as a number of fakes have black or blue logos. The other way to distinguish real from fake is a lot of fakes just have RMC in the logo and are missing the all important Martin Ksohoh beneath the RMC which is probably because the fakers find it too expensive and difficult to print the small letters on the leather patch. 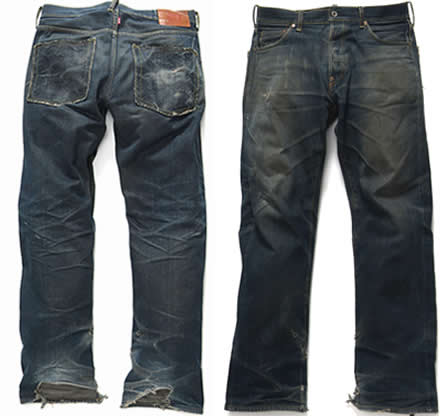 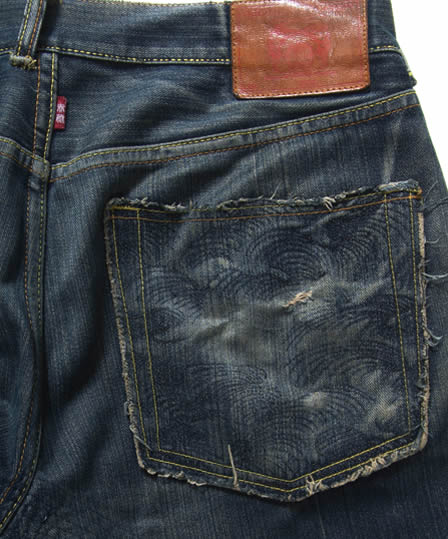 RMC by Martin Koshoh is an original local brand in Hong Kong, founded in 2002. Directed by Martin Lee Yat Ming, the product design is based on the concept of exquisite embroidery stitching technique on denim garments.

The name Red Monkey Company abbreviated â€œRMCâ€ and branded RMC by Martin Ksohoh carries two connotative meanings. â€œRedâ€ symbolizes the searing red sun as well as Oriental. Whereas, â€œMonkeyâ€ signifies evolution, of which apes evolved into human being. â€œCompanyâ€ is the workshop consisted of creative persons, ideas and projects.

With its persistence on high quality and traditional artisanal spirits, the brand has created an exclusive collection of delicate and artistic denim.

Materials are mostly selected from Japan, America and Italy. And a special kind of textile, colored cotton, is grown naturally in ivory rather than pure white and thus reduces the use of dye in the dye bleaching process. This eco-friendly fabric was awarded the Golden Certificate from Textile Industry Association of France. Each individual RMC by Martin Ksohoh merchandise is constructed of the highest quality materials, supplement with elite fabrication and detailed embroidery technique. The brand has enhanced itself to the international superior level.

RMC by Martin Ksohoh endeavors to be innovative and fashion forward and break through the limits on denim production. The pre-wash technique had already anticipated skills and quality of other local producers and amazed the international ones in the early days. Later, many exquisite embroidery designs came under the spotlight on the worldâ€™s fashion runway. Their establishment has won recognition in the industry. Limited edition collections designed with a new dimension in the embroidery pattern, which are popular overseas in Japan, Europe, America, etc., are loved by fashionistas and are even hailed as pieces of â€œdenim artâ€ for appreciation.

In 2005, RMC by Martin Ksohoh has adopted â€œFlockingâ€, a high production cost stitching technique into their jeans design and successfully created a breakthrough effect. And the status of â€œDemin Kingâ€ is once again reassured. BUY HERE

Because of their status as one of the most desired jeans on the market today, RMC jeans are heavily counterfeited throughout the world. To help protect buyers from counterfeitors, Martin Yatming, aka Martin Ksohoh, founder of RMC jeans, has provided Kitmeout with the following information: 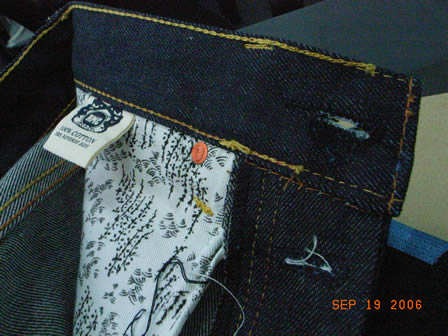 1. All seams should be stitched in double yarn and not single yarn. Poorly finished button holes and sewing. Pocket lining should not be white, it is ivory and made of thicker fabric. The photo above is how fake RMC jeans look. 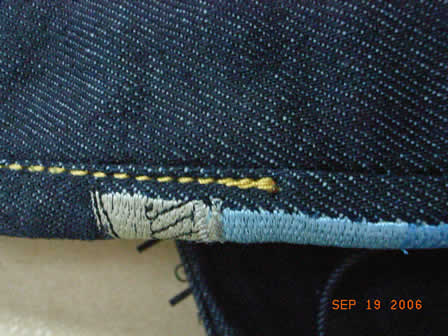 2. The real RMC jeans embroidery on the “Toyo Story” Collection always finishes in the side seams regardless of the waist size and fakes have a gap and do not go into the seams. The photo above is how fake RMC jeans look. 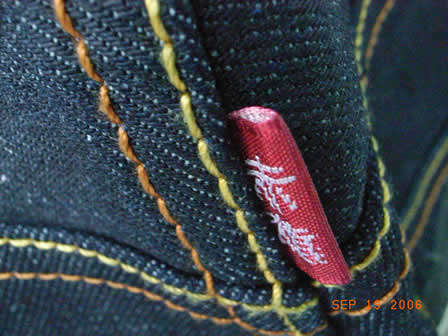 3. The RMC Jeans red tab should be red outside and inside, unlike the fakes which are red outside but white inside. Fake red tabs will aslo shrink after washing whilst the genuine does not. 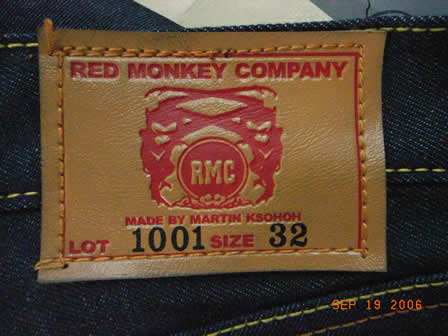 4. Real RMC has a leather waistband patch and not imitated PVC. The patch is also single stitched with double yarn all the way round and not partly double stitched like the photo above. 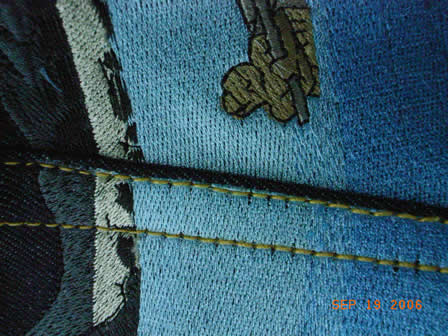 5. RMC embroidery should be continuous and no denim space should be seen. On the fakes above the embroidery is out of line and does not match. 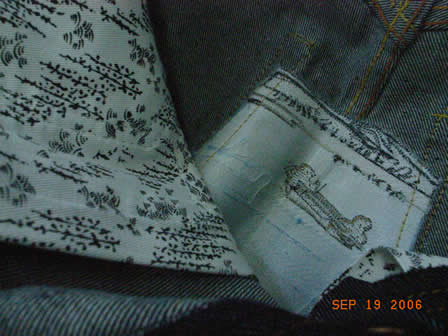 6. On these fake RMC Jeans the inside white yarn is unbalanced and poorly finished. 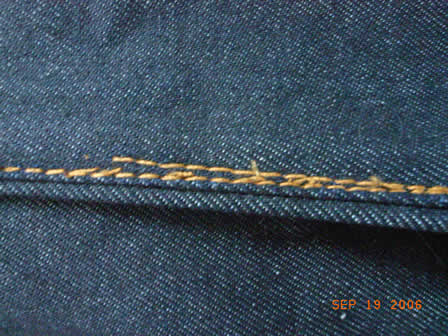 7. Fake RMC Jeans are poorly stitched. Real RMC jeans are stitched by master craftsmen. The photo above is how fake RMC jeans look. 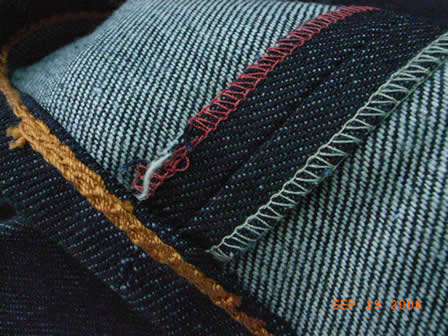 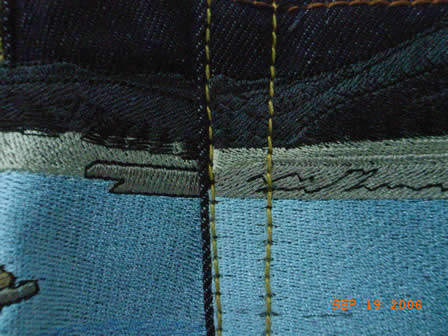 9. Fake RMC Jeans have a thin space of denim showing and the embroidery doesn’t line up. Also the colour of the blue embroidery changes drastically instead of fading gradually. Real RMC jeans do not show denim spacing, it is fully embroidered to the edge of the fabric and this is then turned into the side seam. The real “Toyo Story” Collection has 800,000 stitches and is more like a tapestry. The real RMC “Toyo Story” Collection has 1002 stamped on the leather patch and not 1001.

RMC Martin Ksohoh or, to be more precise, RMC by Martin Ksohoh is the brain-child of Martin Yatming, the design genius and fashion guru behind the Red Monkey Company of 2005. Martin is renowned throughout the world as a denim master whose attention to detail is unrivalled. If you thought Red Monkey 2005 was good you’ve seen nothing yet! Keep your eyes peeled for RMC by Martin Ksohoh – this brand will blow your mind! Thanks to England Star, Darren Bent, for modelling these 2005 Red Monkey Jeans.

People could fairly be mistaken for a new collaboration between denim giants Evisu and denim new boys RMC; on one back pocket there’s the unmistakable RMC embroidery and on the other back pocket there’s a logo that could easily be mistaken for Evisu’s gold gullwing. This is no divine denim collaboration though, this has to be the weirdest fashion venture of 2006 since the big gold gullwing is in fact a big gold Macdonald’s “M”, the world-famous carnivorous clown.

Apparently Ronald MacDonald commissioned RMC and Eric Kot to design a new uniform for their staff. In response this unlikely team designed a basic pair of jeans using the 1001 model with the RMC signature Tsunami pattern on the right back pocket, and added MacDonald’s big golden “M” on the left. It’s almost impossible to believe that RMC would jeopardise it’s credibility by accepting this commission but then seeing is believing!