Megan Denise Fox (born May 16, 1986) is an American actress and model. She began her acting career in 2001 with several minor television and film roles, and played a recurring role on Hope and Faith. In 2004, she launched her film career with a role in Confessions of a Teenage Drama Queen. In 2007, she was cast as Mikaela Banes, the love interest of Shia LaBeouf’s character in the blockbuster film Transformers which became her breakout role and earned her various Teen Choice Awards nominations. Fox reprised her role in the 2009 sequel, Transformers: Revenge of the Fallen. Later in 2009, she starred as the titular lead character in the film Jennifer’s Body.

In 2004, Fox began dating Brian Austin Green, of Beverly Hills, 90210 fame, after reportedly having met on the set of Hope & Faith. They were involved in an on-again, off-again relationship, before finally marrying in June 2010. 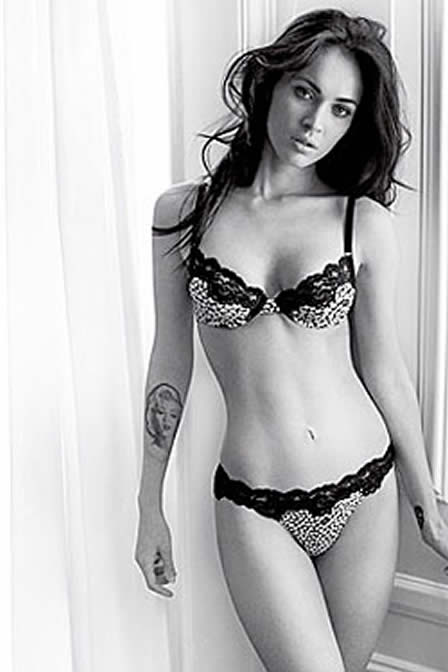 Armani unleashed Megan Fox’s panty and bra ad. She looks hot, of course, but her stomach is curiously smooth. Everyone’s seen the recent pictures of her AND HER SIX-PACK frolicking on the beach in Maui. Did Armani retouch it away or did she just eat a lot of cupcakes leading up to this shoot?