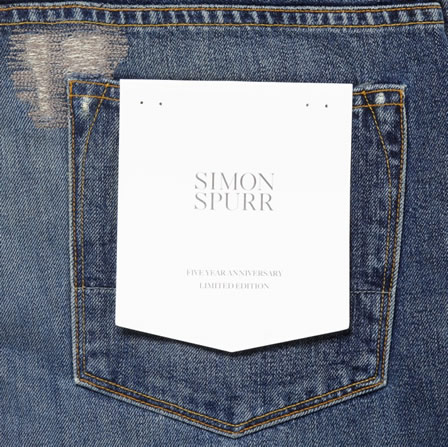 After launching his eponymous denim line in the fall of 2006, menswear designer Simon Spurr has released a limited-edition jean to commemorate the company’s five-year anniversary. Crafted with the finest details, the SIMON SPURR 5 Year Anniversary Jean uses wash details and hand-finished repairs inspired by the original pair that Spurr has worn over the past five years. Adding to their individuality, each pair is signed, numbered and dated by Spurr.

“To celebrate the company’s 5-year anniversary, we created a limited edition jean to acknowledge and reinforce the brand’s initial starting point,” Spurr said. “These jeans reflect the personal and natural wear of the very first pair of SPURR jeans in existence.” 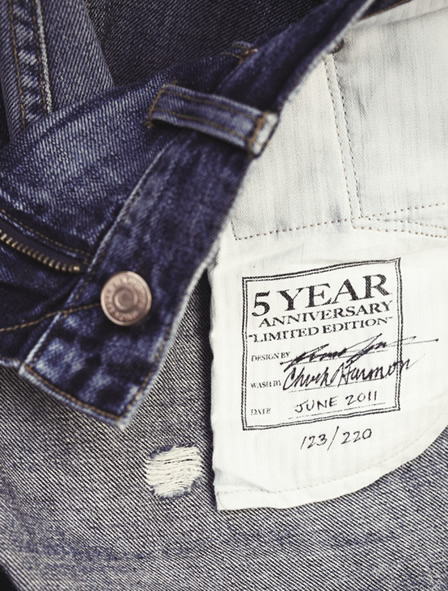 Using custom yellow selvage denim, produced by Cone Mills in North Carolina, SIMON SPURR jeans are defined with branded buttons and rivets along the chain stitching at the waist band and hem. For extra softness and give, pima cotton is used in the weft of these medium-rise, straight-cut slim “Made in the USA” jeans.

In the fall of 2006, Simon Spurr launched his menswear line SPURR with three distinct styles of American-made selvage jeans. Over the course of 2007, the line was expanded to include sportswear, suiting and accessories, quickly establishing SPURR as a full lifestyle brand. In 2009, the brand was broadened once again with the creation and development of SIMON SPURR, a designer collection which paralleled and complemented the newly-contemporized SPURR. Spurr’s clean and confident design aesthetic is clearly informed by both his English upbringing as well as by his years working with Hedi Slimane, Calvin Klein and Ralph Lauren. In 2009, Spurr received the prestigious nomination for the CFDA/VOGUE Fashion Fund Award and has since been nominated for two CFDA Awards, most recently for Menswear Designer of the Year. SIMON SPURR and SPURR are sold at leading retailers worldwide including Bergdorf Goodman and Saks Fifth Avenue.