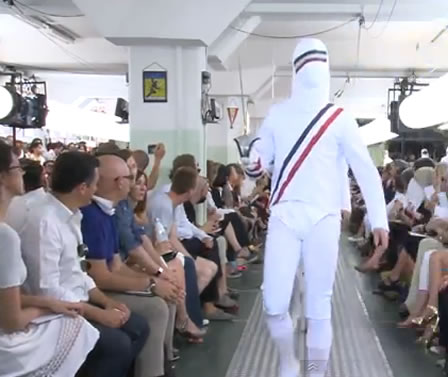 Moncler is a famous name that is familiar to anyone who loves the mountains and easy wear. The name comes from the abbreviation of Monestier de Clermont, a place near Grenobie where, in 1952 Rene Ramillion and Andre Vincent founded what would become one of the most famous outerwear companies. Ramillion was the best known manufacturer of mountain articles in the city, but he was also a versatile mind whose talent was demonstrated by dozens of patents.

As early as 1933 he had started up a company by that name, specialising in metal mechanisms for sports: ski poles, bindings, and tent frames. He also provided ski bindings to the French Army, and the people he met and events he experienced through this connection proved to be life-altering. Due to “proven need” during World War II, his company was not seized, and through his contacts with the French Alpine troops, he met Lionel Terray, a decisive player in the history of Moncler.
The Origins

During its first few years, the company, headed by Andre Vincent, a Grenoble merchant and a friend of Ramillion, who dealt in sports articles, successfully sold solid, sturdy objects: tents, down sleeping bags, a unique model of lined cagoules, and good sewing machines, recovered from a former slipper factory.

The tents in particular met the favour of the market, becoming so famous that they were simply known as “les Ramy” , the symbol of a rapidly developing phenomenon – vacations. Vacations became popular throughout Europe in the 1930’s, but exploded in the post-war period with its new found freedom of movement. They transformed into a ritual that became increasingly popular due to motorcycles, Lambretta scooters (sometimes Vespa‘s), and small cylinder autos that were cheap and manageable. And also thanks to perfect tents, with telescopic poles and outer reinforcement to cover them.

Moncler’s history was shifting, and the definitive catalyst bore the name of a glorious weekly magazine, Elle. It’s attentive journalists sensed that this mountain garment could easily become a must for city life. And on that occasion, the down jacket also vaunted eccentric stitching, vertical in some places, horizontal in others and splendid colours, even through the laque nylon of the period came in only four shapes: yellow, blue, orange and green. “It’s a revolution”, enthusiastically exclaimed the editors who photographed it. They showed rare foresight, as the passion for sportswear was still at least ten years away. In 1988 the entire editorial staff of Madame Figaro posed in Moncler down jackets for their Christmas greetings. As it became metropolitan, Moncler’s ascent was unstoppable, and in 1980 it met the designer Chantal Thomas, with whom it began a collaboration that lasted until 1989 and radically changed its appearance: buttons instead of zippers, fur trim, satin, reversible fabrics. Continuing the transformation, in 1999 the first Spring/ Summer collection was presented, and in 2002, for the brands fiftieth anniversary, a couture collection was presented, enriched with embroidery by the famous Lesage.