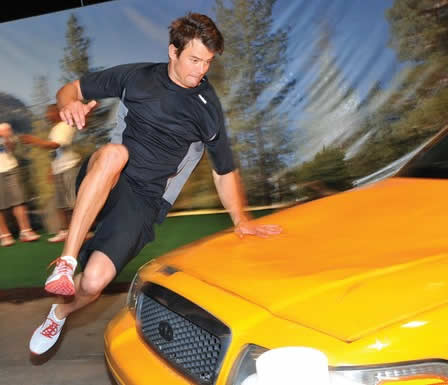 Reebok is living on the edge. To tout its new RealFlex sneaker, the brand called in celebs Ali Larter and Josh Duhamel to show off some big-screen stunt moves — such as diving over a taxi cab or flying through a window with the use of a trampoline — all while wearing the natural-motion running kicks, which hit the market last Thursday. “I love doing stunts,” Larter said, adding that the sneakers work well for her busy, on-the-go lifestyle as a new mom. Meanwhile, Duhamel told Insider the trampoline jumping was his favorite activity of the day. And when asked if he’d ever consider bowing his own footwear line, following in the footsteps of wife Fergie, Duhamel admitted he’d rather stick to acting. “I [do] have some great pumps coming out,” he joked. “But that’s her realm, so I doubt it [will ever happen].”