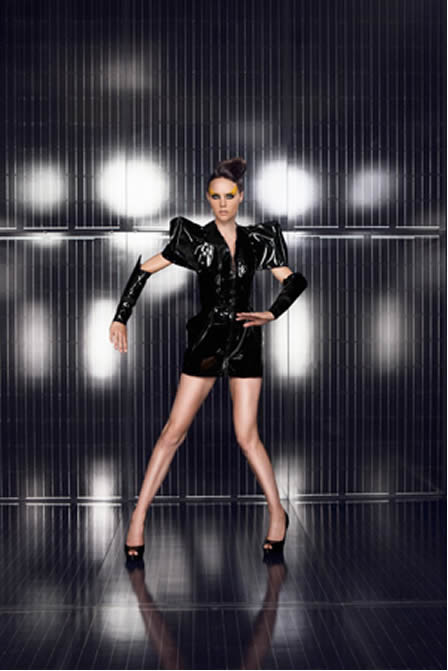 The concept was first introduced by NOHARM who used material produced by a factory using wind and solar power.

In recent photography sessions in Portland, Seth Aaron directed modeling and photography of the all-black dress, paying tribute to SolarWorld’s new, sleek, black high-performance solar panel. The outfit highlights the ‘Solar Is the New Black’ theme of this year’s Portland Fashion Week, which will feature a runway composed of SolarWorld’s black solar panels and the ‘Seth Aaron SolarWorld Collection Presented by Portland Fashion Week.’ Seth Aaron took inspiration from the Hillsboro, Ore., operations of SolarWorld, the largest and most experienced U.S. solar manufacturer.

Seth Aaron believes his designs are the first to go far beyond literal interpretations of solar power that have incorporated actual technology elements for show or use and artistically embrace what he called “our future solar power.” By combining fashion with solar-technology design influences, Seth Aaron joins SolarWorld and Portland Fashion Week in making a statement that sustainability is fashionable.

“The first look really captures my first impression when we walked onto the floor of the SolarWorld factory,” Seth Aaron said. “It’s been interesting to see how one piece branches from the last. This will be a fun mix of fantasy and ‘wearability’, hardness and softness – pieces that take concept and costume and connect them with reality. It’s an artistic story about solar power and renewable energy. But, as it should be, it’s a fashion story, a fashion collection.”
The collection hits the runway on Oct. 9 at Portland Fashion Week, the nation’s first to offset its energy and water use with contributions of certificates for green, carbon-neutral energy as well as water savings. The eco-friendly production showcases the highest number of sustainable labels of any fashion week in the country, along with independent and fair-trade high-fashion designers.