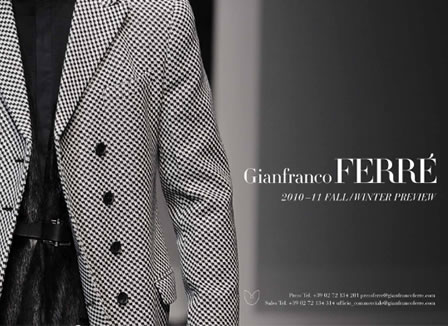 Gianfranco Ferré Said to Be Near a Sale to U.S. Private Equity Group.

Gianfranco Ferré, the Italian fashion house in bankruptcy protection, is near a deal to be sold to a group led by a U.S. private equity firm for about €18 million, including debt, two people with direct knowledge of the matter said Monday.

Gianfranco Ferré (15 August 1944 – 17 June 2007) was a fashion designer also known as “the architect of fashion” for his background and his original attitude toward creating fashion design.

Born in Legnano, Italy, he received a degree in architecture in 1969 at the Politecnico di Milano university. Ferré began his fashion career in 1970 by designing accessories, then worked as a raincoat designer in 1972-74. He started his own company Baila in 1974 and launched his signature collection for women in 1978. His first men’s collection appeared in 1982, followed in 1986 by his first couture collection in Rome.

Ferré became Stylistic Director of Christian Dior in Paris in 1989, when he was chosen by owner Bernard Arnault to replace Marc Bohan. In 1996, it was announced that Ferré would end his engagement with Dior with the Spring 1997 collection for the label.

His own label is more relaxed and pared-down than Dior. Sophisticated white shirts have become the symbol of his personal signature in fashion design.

Ferré appeared to be extremely critical of trends and fashion gimmicks. He dealt with his demanding schedule, being responsible for a French top fashion brand and his own Italian label, by commuting between Milan and Paris in his private plane. Ferré had a lakeside home in Lake Maggiore, near Milan.