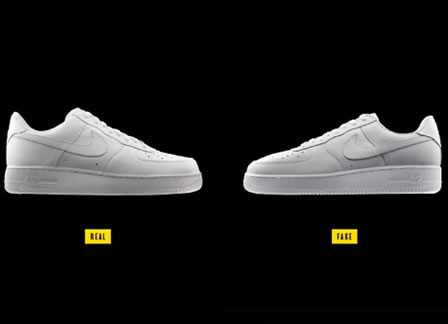 The NY Times recently ran a story on the difference between real and fake Nike shoes. They followed Lin, a factory manager, who was not authorized to make Nikes and studied his counterfeit shoe process.

A shopkeeper in Italy placed an order with a Chinese sneaker factory in Putian for 3,000 pairs of white Nike Tiempo indoor soccer shoes. It was early February, and the shopkeeper wanted the Tiempos pronto. Neither he nor Lin, the factory manager, were authorized to make Nikes. They would have no blueprints or instructions to follow. But Lin didn’t mind. He was used to working from scratch. A week later, Lin, who asked that I only use his first name, received a pair of authentic Tiempos, took them apart, studied their stitching and molding, drew up his own design and oversaw the production of 3,000 Nike clones. A month later, he shipped the shoes to Italy. “He’ll order more when there’s none left,” Lin told me recently, with confidence. Click Here to read full story.