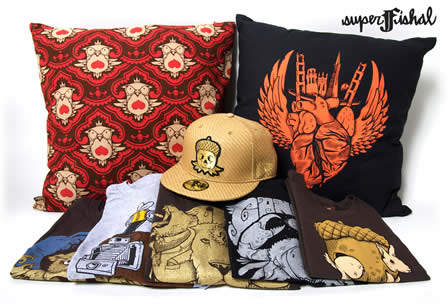 It’s Jeremy Fish time at Upper Playground, you could even say that Upper Playground is currently a little obsessed with that bearded artist… As part of the third and final leg of Jeremy’s ‘The Road Less Traveled’ tour, he will be opening shows at the FIFTY24 Portland Gallery on Saturday July 10th, followed by a show at the FIFTY24 Seattle Gallery on Saturday July 17th. And along with the gallery openings Upper Playground is releasing a large capsule collection from Jeremy Fish’s superFishal line consisting of five T-shirts, a 59FIFTY New Era and two pillows.

The T-shirts all feature Jeremy’s signature cuddly creatures as well as a couple takes on astrological signs. The 59FIFTY New Era is called ‘Acorny’ and is a perfect summer hat with straw exterior and a gold embroidered skull. And the pillows feature one of Jeremy’s most famous graphics, ‘I Left My Heart in SF’ and his pattern ‘Fowl Mood.’