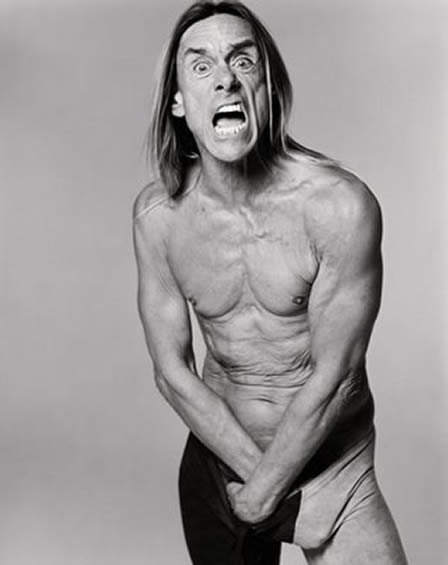 Even at the Barneys launch party for his own T-shirt collection with Archive 1887, Iggy Pop was as close to shirtless as possible. “I don’t have great taste in clothes, so I don’t wear much of them,” he said, cocking his head toward his top, which was slashed all the way down to his chiseled abdomen.

“When I get up in the morning, I stay nude for three or four hours. And if I really feel like getting formal, I’ll put on board shorts. I own about a dozen pairs of Quiksilver board shorts. That’s my mainstay.” What does he do if he has to leave his house to buy, say, toilet paper, or put gas in his Ferrari? “If I have to actually go out somewhere, then I make a big decision: Am I going to wear something besides the board shorts? I almost never do. But if I’m going to go out to dinner, I favor Brioni.” Really? “Yes, I dress like Donald Trump. I wear very nice Italian things. Brioni, Cerruti, and some Versace and some Dolce & Gabbana, but classic, old-school shit. And I like some nice Brioni polo shirts, things like that. They make me look like a perfect gentleman.” The irony of the chronically bare-chested Pop doing a T-shirt line was apparently an ongoing joke among the design team. “We were like, ‘Wow, Iggy will never wear one of these shirts,'” said Grieg Bennett, the collaborating creative director of Thread Shop. “I don’t recall ever really seeing him in a shirt.”

Barneys creative director Simon Doonan, who has known Pop since the early eighties, agreed: “There’s a fabulous irony about Iggy being associated with a T-shirt line, because one associates him with no clothes. Or maybe with gold lamé tights.” The T-shirts are printed with vintage photographs of Pop, including one from the early eighties where he’s missing a front tooth and staring slack-jawed into the camera lens. Pop has some trouble remembering when and how the image came to be, but he assured us that the gap tooth was actually just black paint. “That’s from ’81 or ’82, and that’s as far out as I ever went in my uh, explorations,” he said. “Musically, at that time — well, for instance, I had to open for Flock of Seagulls, and it was the hair gel, and the long hairdo, and the rigidity of the skinny early eighties ties, fake drum machine, faux-irony vocals, and I hated it. So with the tooth out, I was trying to show my kinship to thieving gypsies, drunk itinerant bluesmen, pirates — stuff that had fluidity and humanity. That was the idea.” Pop also supplied the design team with a full-frontal nude photograph of himself, which Bennett really liked and may decide to feature on a shirt in one of their future collections. “We were thinking about using it. We might still. [But] it was a little much for the first go-round,” he said. So what does Pop actually think of the Archive 1887 shirts? “I asked that the cuts and the fabric be a step up from schmatta at a merch stand at a concert, and they definitely are.”