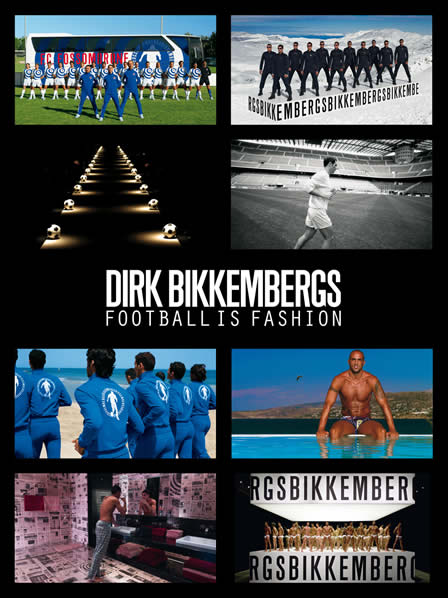 For some time now, designer Dirk Bikkembergs has iterated on the catwalk that “football is fashion”. This time, he has finally put it on paper with the publication of his new book, which unsurprisingly is entitled “Football is Fashion”.

It all began in June 2001 when Dirk Bikkembergs hosted a fashion show at San Siro football stadium in Milano, Italy. This location was a clear statement of the direction of the Dirk Bikkembergs brand: high fashion tailored to the athlete’s lifestyle.

Since the San Siro show, Dirk Bikkembergs has delved further into sport to perfect his vision. Football players, like Fabrizio Ravanelli, were called in to be the models for fashion shows and advertising, whilst the brand dressed leading football teams, such as Inter Milan, Toronto FC and the Slovenian national team for their official off-the-pitch appearances.

The brand also sponsored, and later acquired, a football team in the Italian amateur league, which is today known as F.C. Bikkembergs Fossombrone.

In the continuous pursuit of perfecting the merger of fashion and football, in 2009, Dirk Bikkembergs opened a grand flagship store in Milano at Via Manzoni 47. The concept store is based on a fully furnished luxury apartment tailored to the athlete’s lifestyle. This concept is stressed by the football player who lives in the store.

In all the expressions of the brand since the San Siro show, one thing stands out time and again: Dirk’s visionary and outspoken visual language, which reaches far beyond pure fashion design. It is a strong visual identity, which continues to be expressed in every aspect of the brand, from its collections to its architecture and advertising.

Continuously perfecting the merger of fashion and football, publishing the book, “Football is Fashion” is a logical next step to take.

Showcasing the versatility of the Dirk Bikkembergs brand as it confronts the exclusivity of fashion with the universe of sport, the book is available in two formats: the large-format version in a special edition box (target price: € 149.90), as well as is a small public version (target price: € 34.90).

The book, which is set to be released in October 2010, will be published by in English, with language inserts for the Italian, Dutch, French, Spanish, German and Russian markets.

John Bartlett for the Bon-Ton, Autumn 2011