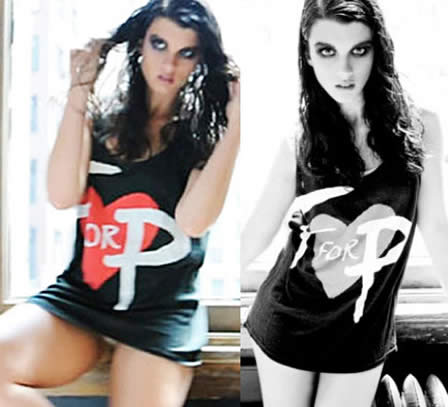 Crystal Renn was very disturbed when her weight yet again became a topic of discussion as online commenters wondered if she was again falling victim to an eating disorder after images of her looking thinner in the Fashion for Passion charity tee surfaced. Renn, who has been anorexic, told Glamour she gasped when she saw the pictures:

Well, I was shocked. When I saw the pictures, I think I was silent for a good five minutes, staring with my mouth open. I don’t know what was done to those photos or who did it, but they look retouched to me. And listen, everybody retouches, but don’t make me into something I’m not. [Reached for comment, photographer Nicholas Routzen explained that Crystal looks the way she does because the photos were “…taken from a higher angle with a wider lens.” But he also added, “I shaped her…I did nothing that I wouldn’t do to anyone. I’m paid to make women look beautiful.”]

In a video of the shoot sent to Glamour by Renn’s agent (we used that video to put together a before and after Photoshop image here), Renn looks more voluptuous than she does in the pictures that ran on Ford’s blog. Renn continues:

I feel completely confident in my own health because I know I don’t look like that, but even to see it in an image was really disturbing to me.

Hopefully this will finally silent the chatter about whether or not she’s losing weight.