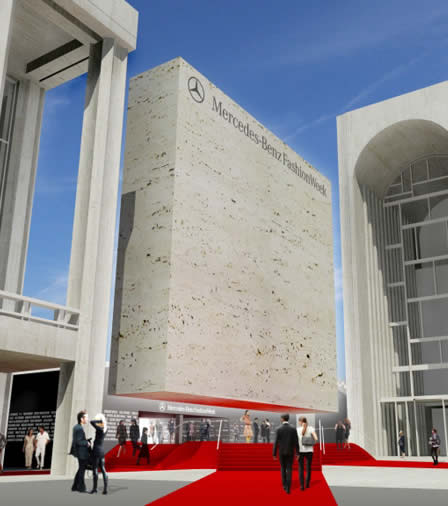 For those who had been following Fashion Week’s move to Lincoln Center for the past several years, then you already know that this is finally coming true after extensive work between City Hall, Lincoln Center, the New York City Department of Parks and Recreation, New York City Economic Development Corporation (NYCEDC), IMG and the Council of Fashion Designers of America.

“This is a very exciting day for us,” said Peter Levy, Senior Vice President and Managing Director of IMG Fashion Worldwide.

“The move has allowed IMG to reinvent and improve so many aspects of Mercedes-Benz Fashion Week as well as develop a stronger link to the surrounding facilities and spaces available at Lincoln Center and the neighborhood. This is the first season in what we are confident will be a long ‘run’ at Lincoln Center.”

The move to Lincoln Center has allowed IMG Fashion to unveil event upgrades such as modernized production capabilities for designers, digital services concurrent with the advanced needs of the 21st Century, better accessibility for attendees through both public and private transportation and great resources/facilities on-site and in the surrounding areas.

The event will continue to host three runway venues, and has added a fourth presentation space for designer presentations, industry forums, press conferences and other activities. The venue cost to each designer will remain the same as in previous seasons of Mercedes-Benz Fashion Week.

Lincoln Center allows a unique opportunity in the evolution of the event, offering expanded resources and facilities around campus for the use of designer, press, industry and consumer activities.